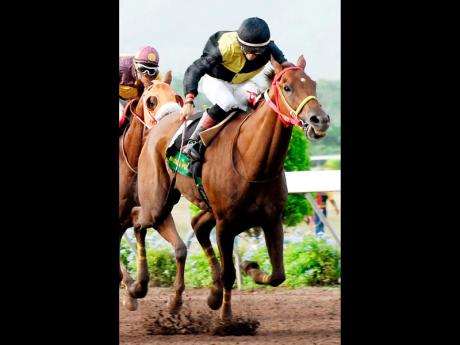 Sunday racing is on at Caymanas Park today, the nine-race programme featuring the 3-y-o and up overnight allowance race over 2,000 metres for the Reynold 'Ren' Gonzalves Memorial Cup.

This is run annually to perpetuate the memory of the former '70s champion trainer, who later became chairman of both the Jamaica Racing Commission and the Betting, Gaming and Lotteries Commission. This marks the fifth Sunday meet since the start of the year.

Seven horses will face the starter for the feature and from the look of things, the race appears tailored for the two-turn specialist RAGING PROSPECT, who was a beaten favourite in this very race a year ago, losing to UPPA TUNE.

By virtue of his consistency, RAGING PROSPECT, with 2.0kg claiming apprentice Ruja Lahoe riding for trainer Fitzroy Glispie, should start favourite to capture his second race this season, having won the CTL Fan Appreciation Day Trophy over 1820 metres by 8 1⁄2 lengths from the stretch running MIRACLE STAR on New Year's Day.

The very fit and consistent MIRACLE STAR renews rivalry from the convenient mark of 50.0kg under title-chasing jockey Dick Cardenas and with his form appealing, should ensure that RAGING PROSPECT works up a sweat.

Going heavily in RAGING PROSPECT's favour, however, is the fact that he represents the only pace horse in a field of 'slow coaches' and this being the case, should enjoy an uncontested lead passing the half mile. I am expecting him to turn for home with MIRACLE STAR in serious chase, but should have too much in reserve to be caught, with only 52.0.

So, it's RAGING PROSPECT to win from the Patrick Chang-trained MIRACLE STAR and Glispie's other runner, TIMEFORARMS. That's the trifecta.

Elsewhere on the card, the recent winner RAJA HINDUSTANI, now dropped in class with champion jockey Dane Nelson riding for in-form trainer Ryan Darby, should stave off the very fit MARINE DRIVE in the opening race for $350,000-$300,000 claimers over 1400 metres.

Only seven have been declared, but RAJA HINDUSTAN, now stepping down and the May 24 runaway winner MARINE DRIVE, now up in class, represent the in-form horses and it should come down to this pair, with RAJA HINDUSTANI getting the nod.

Other firm fancies on the card are the 2013 Oaks winner LADY ABHIJITA (Nelson up) to rebound in the second race following her pipeopener behind PRINCESS SHINE nine days ago; down in class MIDNIGHT LAUNCH in the fourth; stable-companion INSANE BOLT - now thrown in for a tag - ahead of recent winner AWESOME MARQUE in the sixth; and BAD BOY JUSTIN to open his account in the seventh for maiden three-year-olds.