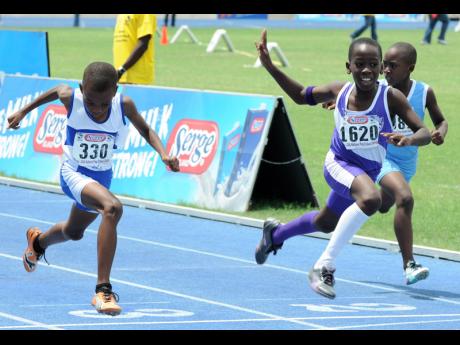 The caption published on Sunday incorrectly listed Aaron Thomas (No.1620) as a representative of Quest Prep. Thomas attends Sts Peter and Paul Prep. The error is regretted.

However, Hydel had to withstand a two-hour protest by runners-up Vaz, one which was eventually thrown out by the meet organisers.

Vaz was disqualified in the penultimate event of the meet - the girls' 4x200m - and Hydel declared the overall champions by five points. Vaz protested the outcome of the same event, stating that Hydel should also have been disqualified from that event.

Quest's Michael Allen and Hydel's Aaliyah Dryden were the outstanding boy and girl performers of the championships, as they captured three and four gold medals, respectively.

Allen's medals includes the boys' Class One sprint double and open ball throw, which he won on the final day of the championships. The lanky Allen first won the boys' 100m in 12.85 ahead of Tarrique Stennett from Vaz (12.99) and Daquan Henry of Lannaman's (13.17).

Allen said he was very proud of his achievements.

"It feels good because going into the 100m and 200m I knew I was going to win both events and so I am very proud of myself," said Allen.

The 12-year-old Dryden, who won the girls' long jump open on Friday, also captured the Class One sprint double.

Dryden picked up her third medal with a 4.76m leap in the Class One girls' long jump final, and her fourth gold when she anchored her school to victory in the girls' Class One 4x100m relay.

"I am very happy with my performance because this is what I trained for all season," said Dryden. "I am also happy because I gave my school a lot of points as this is my final year at the Prep Championships," she said.

Kelsey Christian of Our Lady of the Angels comfortably won the girls' Class One 300m in 41.87. Hydel's pair of Shanoya Swaby (42.79) and Taina Lewis (43.50) took home the silver and bronze medals, respectively.