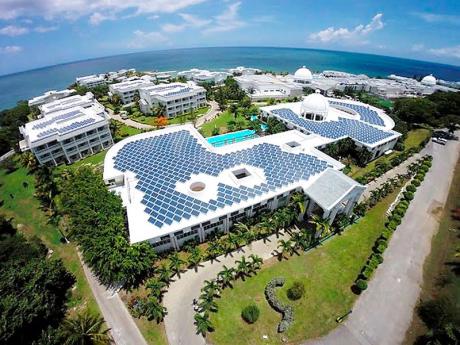 One of Jamaica's largest hotels, the Grand Palladium, Hanover, has been outfitted with what is believed to be the largest solar plant in the country.

The hotel expects to save over J$80 million in energy cost per year from the installation of a solar photovoltaic (PV) power plant by local manufacturer, Sofos Jamaica.

The plant was unveiled at the 1,000-room resort last Friday.

"We are pleased to be pioneers in the industry as the first hotel in Jamaica to embark on such an investment," stated the resort's general manager, José Morgan.

He describes the investment as a win-win for the tourism sector and destination Jamaica.

The project represents a total investment of US$3.4 million by the hotel, which is expected to see full return on its investments after four years and US$21.9 million in energy savings after 30 years, said a media release by Sofos Jamaica.

"This is the first major project for us in Jamaica, but we are already working with Digicel Jamaica and the Tryall Golf Club in Hanover," he revealed.

Sofos Jamaica partners with German solar manufacturer IBC Solar, who are suppliers of their solar modules.

The project has been welcomed by Minister of Science, Technology, Energy and Mining Phillip Paulwell, who told the gathering that the Government of Jamaica was also doing its part to ensure that small hoteliers can invest in renewable-energy solutions.

"Based on current trajectory, solar will become the cheapest energy source by 2030 if we (Jamaica) continue to benefit from economies of scale," Paulwell stated.

"Sofos' arrival in Jamaica is timely and is of critical importance to institutions and companies such as Grand Palladium; it makes perfect economic sense for a country like Jamaica with high energy costs," said Nuño.

The Solar PV system used by Sofos Jamaica are specially structured for the Caribbean and are light-weight, low-maintenance and able to resist up to category-four hurricanes. The PV systems are also equipped with a Sofos customised software, which allows instant information access by Internet on any device from anywhere, as well as stop-system alerts and notifications by email or text messaging.