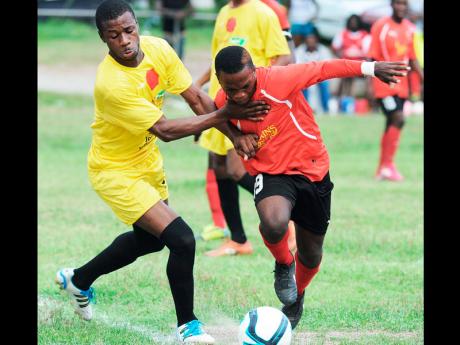 Axum, pushed by a large travelling crowd, took an early lead, courtesy of an own goal in the 11th minute. However, Barbican showed resilience and fought back with goals by Shaquille Lewis in the 41st minute and Shavon Charlton (90th).

The win carried Barbican to six points, the same as Reno, who slammed previous leaders Jamalco 3-0 at Frome Sports Club in Westmoreland. Reno lead on a superior goal difference.

St Mary's Axum missed a number of goalscoring chances, especially a penalty that was kicked wide of the target by Oshane Dunkley in the second half.

Barbican were out-cheered by the Axum crowd that only went silent in the last minute of the game after Barbican found the winning goal.

The Denton Shedden-coached Barbican have now won their second consecutive home game after a loss away to Jamalco in the opening round of the home and away play-off series.

"The plan from day one was to win the three home games and get points in the away games. With two home wins, we are on target. Our next home game is on Wednesday, so a win would put us on our way," Shedden reasoned.

"Today (yesterday), it was a fairly tough contest. However, we were stronger and fitter than our opponents and came back from a goal down," he added.

"We got three points to grab and gave it away. We should have won the game as we got some clear chances, including a penalty that we missed. Barbican is not better than us," he told The Gleaner.

In the other game, Reno, courtesy of a brace by Craig Foster in the 38th and 75th minutes and another by Melville Blair in the 85th minute, easily won against Jamalco.

Jamalco's Rashane Sharpe was shown a red card and ejected in the 76th minute for violent conduct.

With three games remaining in the play-offs, Reno and Barbican are on six points apiece, followed by Jamalco on three and Axum on one point.

At the conclusion of the play-off series, the top-two teams will qualify for next season's Red Stripe Premier League.