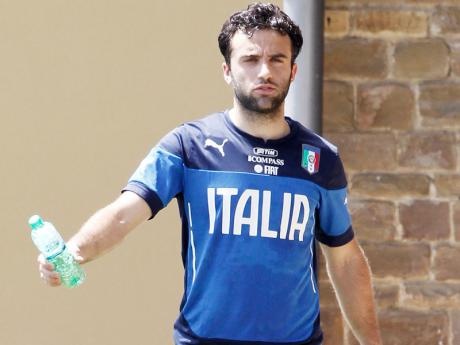 Giuseppe Rossi will miss out on the World Cup once again. The American-born Italy forward was among the players cut from the Azzurri's final World Cup squad on Saturday, in a repeat of what happened to him four years ago.

Coach Cesare Prandelli apparently judged that Rossi hadn't fully recovered from his latest right knee injury in January. Rossi has always been one of Prandelli's favourite players, but the coach opted not to gamble on his fitness despite the forward having been the Italian league's leading scorer before getting injured.

Napoli forward Lorenzo Insigne was selected instead for the 23-man squad.

Rossi played 71 minutes in Italy's 0-0 draw with Ireland on Saturday but failed to make much of an impact in his final chance to impress Prandelli.

Rossi was also one of the final cuts by then-coach Marcello Lippi in 2010, although Lippi said last week that he regretted that decision.

Also cut from Prandelli's 30-man preliminary squad were: forward Mattia Destro; Brazilian-born midfielder Romulo, who has been dealing with a muscle problem; and fullbacks Manuel Pasqual and Christian Maggio.

Key midfielder Riccardo Montolivo was ruled out after breaking the tibia bone in his left leg against Ireland.

Centre back Andrea Ranocchia was selected as a 24th man to go to Brazil as a possible replacement for Andrea Barzagli, who has been fighting injury all season.

Rossi led Serie A with 14 goals in 17 matches with Fiorentina until he re-injured his right knee in January, sidelining him for four months. He returned a month ago, but has not played a full 90 minutes since coming back, and occasionally appeared hesitant against Ireland.

Rossi initially tore his right anterior cruciate ligament during a match with Villarreal against Real Madrid in October 2011, and needed three operations before returning with Fiorentina in May 2013.

Insigne, by contrast, scored twice when his Napoli club beat Rossi's Fiorentina 3-1 in the Italian Cup final a month ago. That was Rossi's first match back.

Cassano made the squad following a resurgent season with Parma. After two years away from the national team, his appearance against Ireland was his first since the 2012 European Championship final.

Immobile led Serie A with 22 goals in 33 appearances, and Cerci is a reliable winger.

Torino fullback Matteo Darmian, who made his Italy debut against Ireland and can play on either the right or the left, was also included, along with Argentine-born centre back Gabriel Paletta.

In midfield, the newcomers are Paris Saint-Germain's Marco Verratti and Parma's Marco Parolo.

Verratti, in particular, shined against Ireland and is considered an eventual replacement for Andrea Pirlo.

Italy opens its World Cup campaign against England in Group D on June 14, then faces Costa Rica on June 20 and Uruguay on June 24.

The Azzurri play Luxembourg in Perugia on Wednesday, then fly out to Brazil a day later.