Federer loses in fourth round 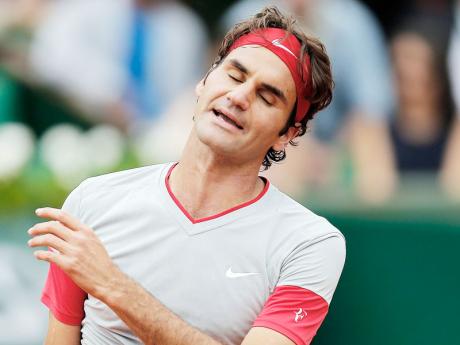 So unbeatable for so long until the closing days of Grand Slam tournaments, Roger Federer is suddenly accumulating early exits.

"A lot of regrets," Federer said. "I just couldn't kind of figure it out."

The 17-time Grand Slam champion had not left Roland Garros so soon since 2004, when he was beaten in the third round by Gustavo Kuerten.

After that decade-old setback, though, Federer made at least the quarter-finals at a record 36 consecutive major tournaments, a streak that ended with a second-round loss at Wimbledon last year. Federer also put together record Slam runs of 10 finals and 23 semi-finals in a row when he was at his dominant best.

Now the 32-year-old Federer has bowed out before the quarter-finals at three of the last four majors.

"I think it was the biggest, probably, win of my career," said Gulbis, who most certainly could have dispensed with the word "probably."

Addressing spectators who sang Federer's first name between points, Gulbis said: "I'm sorry I had to win. I know all of you like Roger."

The fourth-seeded Federer's résumé includes the 2009 French Open title, and he was a four-time runner-up in Paris to Rafael Nadal. But Federer was hardly in top form yesterday, making 59 unforced errors and getting broken twice while serving for a set.

That included at 5-3, 40-15 in the second, when Federer sent an overhead right to Gulbis, who whipped a backhand-passing winner.

The fifth set was all Gulbis, who hadn't been to the quarter-finals at a major tournament since the 2008 French Open. He's spoken openly about focusing more on enjoying the nightlife than perfecting his craft, and drew attention last week for saying he wouldn't encourage his younger sisters to pursue professional tennis because a woman "needs to think about family, needs to think about kids".

In the concluding set, Gulbis raced to a 3-0 lead, thanks largely to Federer miscues. In the second game, Federer netted backhands and forehands to offer up break points, then pushed a forehand wide to give Gulbis a lead he never relinquished.

After that miss, Federer grabbed a ball and swatted it in anger straight up in the air, a rare sign of exasperation from him.

The result fit with the topsy-turvy nature of this tournament: Both reigning Australian Open champions, No. 3 Stan Wawrinka and No. 2 Li Na, lost in the first round; No. 1 Serena Williams left in the second round.

Gulbis now plays No. 6 Tomas Berdych, who eliminated the last American man, No. 10 John Isner. In another quarter-final, No. 2 Novak Djokovic will face No. 8 Milos Raonic. Wimbledon champion Andy Murray and No. 24 Fernando Verdasco set up a fourth-round meeting by finishing off victories in matches suspended Saturday night because of fading light.

In women's action, No. 18 Eugenie Bouchard of Canada swept No. 8 Angelique Kerber of Germany 6-1, 6-2 and will face No. 14 Carla Suarez Navarro of Spain in the quarter-finals.