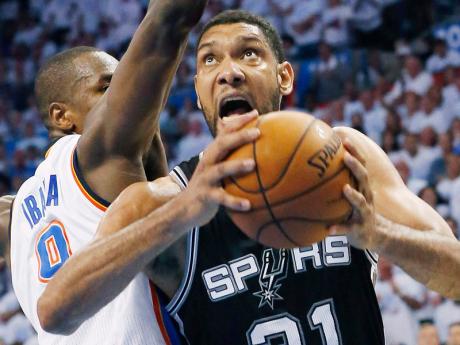 The San Antonio Spurs are back in the NBA finals after beating the Oklahoma City Thunder 112-107 in overtime Saturday in Game 6 to set up a rematch with the Miami Heat.

Tim Duncan had 19 points and 15 rebounds for the Spurs, who will host Game 1 on Thursday night as they try to avenge last year's heartbreaking seven-game loss.

Boris Diaw scored 26 points for the Spurs, who won their conference finals despite point guard Tony Parker missing the entire second half and overtime Saturday with left ankle soreness.

Kawhi Leonard added 17 points and 11 rebounds, and Manu Ginobili chipped in 15 points and six rebounds for the Spurs, who pulled this one out after losing in overtime in Game 6 against the Heat in the NBA Finals.

San Antonio went on to drop Game 7, but put that loss behind and had the NBA's best record this season.

"It's unbelievable to regain that focus after that devastating loss we had last year," Duncan said.

In overtime, Duncan's shot from the baseline rattled in to give the Spurs a 110-107 lead with 19 seconds to go.