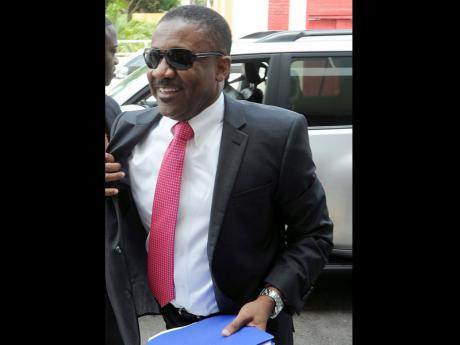 Recently, someone made the observation that, possibly, one of the happiest persons in Jamaica at this moment might be Phillip Paulwell, the man to whom we have entrusted the oversight of our energy needs.

Mr Paulwell has singlehandedly managed to make a mess of almost everything that has fallen under his watch and has cost our country, and by extension us, the tax-paying public, millions of dollars.

Despite all of this, and the most vociferous calls for his removal from public office, he has remained. He appears to possess the hide akin to that of an elephant, in addition to some powerful personal dispensation of protection from his doting 'mother', Prime Minister Portia Simpson Miller. Phillip Paulwell - Portia's Pickney (we could refer to him as 'PP' from this point onwards) - it would appear, will be with us for a very long time to come.

The recent outcry regarding the unjust treatment meted out to Prof Bain by Prof Nigel Harris, allegedly on behalf of our university, has dominated our media over the past couple of weeks and has served to deflect the public scrutiny to which Mr Paulwell had been subjected only a few weeks ago - hence the source of joyful exuberance being experienced by him now.

I can only imagine that the goodly gentleman must be resting quietly at home while seeking to negotiate the importation of a gift from some friendly neighbouring country of some lampshades with which to cover the light bulbs freely given to us, and for which we have had to pay so dearly.

My mind goes back to my childhood days growing up in Vineyard Town. We had a parrot. His name was 'Pretty Pauly' - another 'PP'! Pretty Pauly was part of the family. One of his wings was clipped, and Pauly ('PP the First', as we will now refer to him) sat in an open cage hanging from a branch of the lignum vitae tree in our backyard.

PP the First was very vocal and made a lot of noise. During the day, he would climb out of his cage and enjoy the freedom of the tree before returning to said cage at night. One day, PP the First disappeared. Apparently, he had been the victim of teasing by someone - "It wasn't me!" as Shaggy once said. Sentiments that were subsequently echoed by PP and his aide, Kern.

PP the First took great offence at what had been said about him and reacted in disgust by climbing down from his perch and walking away. We never saw or heard from PP the First again. We missed him dearly. PP the First was a principled parrot, and felt that since he was not wanted, he would disappear in silent protest and never return. PP has shown himself to be bereft of any such principles.

Dare we hope that Mr Paulwell will follow the same path of action as that of Pretty Pauly, and disappear quietly?

A much safer bet would be for PERFECT NEIGHBOUR (no disrespect to this fine thoroughbred) to land the three legs of the American Triple Crown as well as the English Grand National.

John Royes is a consultant paediatrician. Email feedback to columns@gleanerjm.com and jcroyes@gmail.com.