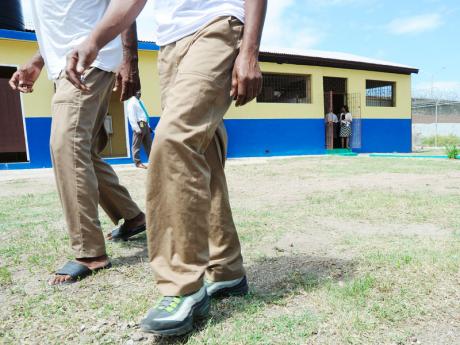 The Department of Correctional Services is sending some prisoners back to school.

No, they will not be asked to resit reading, writing and 'rithmetic. They will be schooled in areas such as personal development, family life education, decision-making skills, anger management, entrepreneurship, and drug awareness.

Yesterday, the department launched a pilot rehabilitation project specifically designed for short-term prisoners - those serving three years or less and who account for more than 70 per cent of the adult population across correctional centres islandwide.

"Short-term inmates were inadequately served where rehabilitation was concerned. Those inmates were either bypassed or chose not to participate in any programmes, unless they were given hard labour," Marcia Wright, director of rehabilitation at the Tower Street Adult Correctional Centre, said during the official launch of the Behaviour Modification Programme for Short-Term Inmates.

She explained that short-term inmates are usually repeat offenders, "returning to the institutions two, three times or even more".

Usually, they are involved in non-violent crimes such as fraudulent conversion, obtaining property under false pretence, possession and smoking of ganja, while others were convicted for wounding, malicious destruction of property, burglary and other such infractions.

Under the intense two-week programme they will receive training from members of the Department of Correctional Services, as well as experts from other agencies. Inmates who complete the programme will filter to the regular rehabilitation and educational/vocational programme.

Meanwhile, British high commissioner to Jamaica, David Fitton, expressed delight after viewing the new classrooms, which were constructed by inmates under the supervision of the institution's projects team. The British High Commission contributed $6 million to meet the construction cost and provide equipment, but the commissioner admitted that he had reservations about the project in the beginning.

He told The Gleaner: "I looked at this place and I thought this is going to be difficult. We've done a number of projects here in the past so we decided to have a bit of faith and a bit of trust and put our money in and next time I came back, I was surprised, how it was developing. So although I wasn't sure at first whether I thought it was really going to happen, I was really impressed each time, and especially this morning, and I've seen the state of it catering for about 100 inmates in different classrooms, state-of-the-art equipment and workspaces.

"It's very impressive and it really makes a difference. They can now have real chance (at life) rather than just going into the same cycle of crime and reappearing in the prisons."