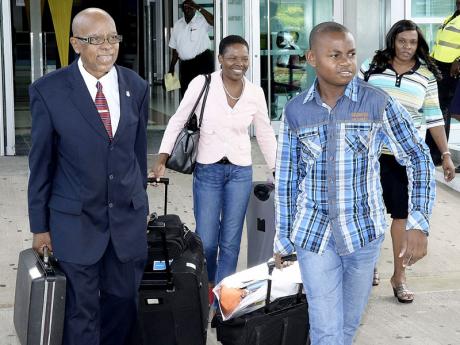 A proud Tajaun Gibbison (right, foreground) on his arrival at the Norman Manley International Airport last Saturday. Others in the picture are (from left) the Rev Glen Archer, Tajaun's coach; Nordia Craig, The Gleaner's manager, business development and marketing; and Yvonne Gibbison, Tajaun's mother.

The Gleaner's Children's Own Spelling Bee champion, who officially placed eighth in the competition, underscored the importance of hard work, adding that it was a rewarding experience.

"Excellence requires a lot of sacrifices. You have to be disciplined and keep focused," he declared.

"Going into the competition, my goal was to be in the top 10, and I achieved just that. I could not have done this without the support of my parents and my coach. There were some challenges with the vocabulary tests; it was hard, but I managed to overcome them," Gibbison said.

Tajaun's mother, Yvonne Gibbison, was overwhelmed with joy, saying it was a challenging yet rewarding journey.

"He loves to research and he is a hard worker, and even though I was nervous throughout the competition, I knew he would have made Jamaica proud," she said.

"Every Saturday morning we had to wake up, take three different (vehicles) to get to Kingston, and sometimes after training we wouldn't get home 'til 10 in the night. He got distracted sometimes because it was tough, but we made it," she said.

Christopher Barnes, managing director of The Gleaner Company, was among those gathered at the airport to welcome Tajaun.

For Barnes, Tajaun's confidence and drive throughout the competition were contributing factors to his success.

"We are extremely proud of him because his accomplishment has placed Jamaica on the map once more," he said. "It's also evident that we do not only excel in music and sports but that as a country, we take education seriously."

Added Barnes: "I want to encourage parents to follow the example of his because it is extremely important that we support our children."