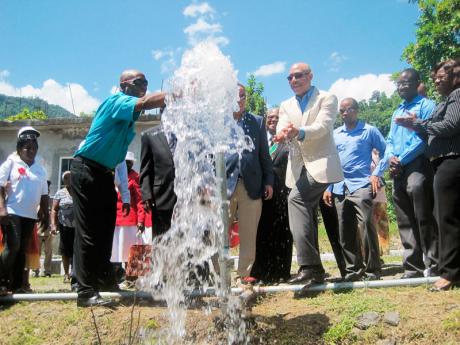 Onlookers, including Governor General Sir Patrick Allen, cheer as the water source in Fruiful Vale is turned on. - PHOTO BY GARETH DAVIS

"This is where I grew up. I have fond memories growing up in this community as a boy. The days spent at the river, competing in sports at my school, and the prizes that I won are still fresh in my mind. Today, you have a brand-new state-of-the-art information technology centre, a multipurpose complex, and a new water-supply system. I urge you to use the facilities with care and pride and to ensure that they are preserved for others, including future generations."

The touring party, which included East Portland MP Dr Linvale Bloomfield, Mayor of Port Antonio Benny White, Custos of Portland Lincoln Thaxter, and Managing Director of the Jamaica Social Investment Fund (JSIF) Scarlette Gillings, journeyed to the old Fruitful Vale All-Age School, where the ribbon to the information technology centre was cut and the doors opened by the GG.

Shortly after, the party journeyed to the newly constructed Fruitful Vale water-supply system, Sir Patrick had a mouthful of water to drink before turning off the water source.

Approximately $105 million was spent on the three projects, with JSIF providing the bulk of the funding totalling approximately $70 million.

The information technology centre, a project undertaken by Vaz, the Fruitful Vale Benevolent Society, and the Universal Service Fund, was retrofitted with 19 computers, printer, scanner, and a fax machines, furniture and bathrooms.

The multipurpose complex, which comprised a community centre, a multipurpose court for netball, basketball, and tennis, along with a playfield for cricket and football, was also retrofitted with a spectator stand, and perimeter fencing.