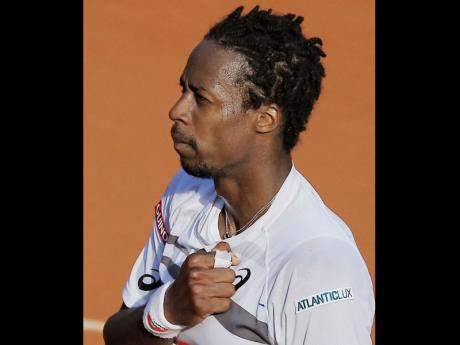 Maybe, just maybe, Rafael Nadal was a tad vulnerable, the thinking went before this French Open. He had lost three times on his beloved red clay already this year, more defeats than he ever had on the surface before heading to Roland Garros.

Then came an admission, after the Grand Slam tournament's third round, that his back was bothering him and slowing his serves.

Well, leave it to the eight-time French Open champion's upcoming quarter-final opponent - 2013 runner-up David Ferrer, one of the men who beat Nadal on clay this spring - to set the record straight.

Nadal certainly looked the part in the fourth round yesterday, when he won 18 points in a row during one stretch en route to beating 83rd-ranked Dusan Lajovic of Serbia 6-1, 6-2, 6-1 for a record 32nd consecutive victory at the French Open. That broke Nadal's own mark of 31 and moved him a step closer to a fifth straight title in Paris.

"My back can be pretty unpredictable," said Nadal, who wore thick vertical strips of athletic tape under his shirt. "I'm not lying. It's totally unpredictable. I don't want to speak too much about it."

The other quarter-final on the top half of the draw will be Wimbledon champion Andy Murray against 23rd-seeded Gael Monfils of France.3

No. 7 Murray beat No. 24 Fernando Verdasco of Spain 6-4, 7-5, 7-6 (3) in a match marked by a wild third set. Verdasco held to get within 4-3 with an apparent service winner, but chair umpire Pascal Maria said that point should be replayed because a line judge called the ball out. That prompted Verdasco to begin berating Maria, shouting "Are you kidding me?" and saying he wanted a tournament supervisor to intervene - until Murray conceded the point.

"He's not the kind of umpire I get along with, I can tell you that," Verdasco said.

Monfils advanced with a much more staid 6-0, 6-2, 7-5 win against 41st-ranked Guillermo Garcia-Lopez of Spain.

Two women's quarter-finals will be No. 4 Simona Halep of Romania vs. 2009 French Open champion Svetlana Kuznetsova of Russia, and 2012 runner-up Sara Errani of Italy vs No. 28 Andrea Petkovic of Germany.

"I played aggressive," Halep said after defeating the last American singles player left in the tournament, No. 15 Sloane Stephens, 6-4, 6-3. "I dominated the match, I think."

Petkovic's 1-6, 6-2, 7-5 victory over 148th-ranked Kiki Bertens of The Netherlands was the only three-setter for women yesterday, a two-hour struggle filled with 77 unforced errors and 14 service breaks.