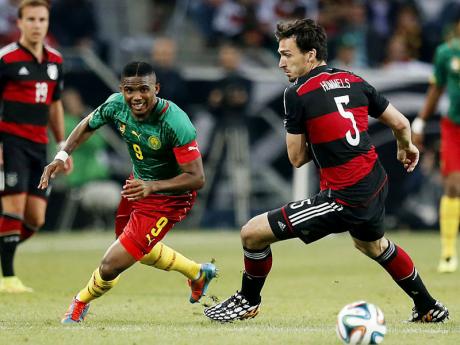 Germany's Mats Hummels (right) and Cameroon's Samuel Eto'o challenge for the ball during a soccer friendly match between Germany and Cameroon in Mönchengladbach, Germany, on Sunday. The game ended 2-2. - AP

Cameroon coach Volker Finke included Samuel Eto'o and Alex Song in his 23-man squad for the World Cup, where the West African nation hopes to reach knockout stages for the first time in 24 years.

Cameroon were the first African team to make the World Cup quarter-finals in Italy in 1990, but have won just one game in the four tournaments they have qualified for since, failing to get out of their group in 1994, 1998, 2002 and four years ago in South Africa.

Finke included Chelsea striker Eto'o, Barcelona midfielder Song in a squad without any major surprises, along with defender Benoît Assou-Ekotto, who is on loan at Queens Park Rangers from Tottenham. Forwards Vincent Aboubakar and Eric Maxim Choupo-Moting also made the final squad announced on FIFA's deadline day for player lists to be registered.

"A team is a blend of talent," Finke said. "For Brazil, we need efficiency and experience to cruise into the second round."

The German coach dropped five players from the larger group he took to Europe for a training camp in Austria and friendly games against Macedonia, Paraguay and Germany. Among those to miss out were veteran striker Mohammadou Idrissou and defender Jean-Armel Kana-Biyik, whose father and uncle played at the 1990 World Cup.

Cameroon beat Macedonia, lost to Paraguay and drew with Germany in tune-up games for this month's tournament. They will play Moldova in a final friendly at home in Yaoundé on Saturday before heading to Brazil, where they will meet Mexico, Croatia and the host nation in three tough group matches.