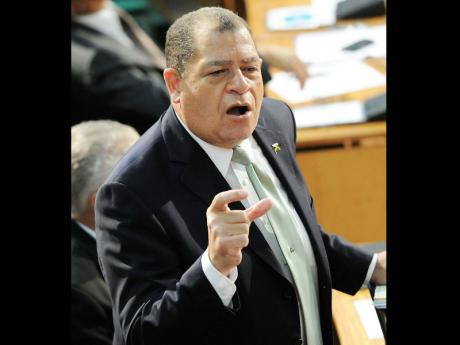 Opposition Spokesman on Finance Audley Shaw makes a presentation to a Budget Debate in Parliament. - File

The government has put in place measures to limit the build-up of payment arrears for goods and services supplied to ministries and departments, an issue over which Opposition Spokesman on Finance Audley Shaw has taken the administration to task.

Under the Extended Fund Facility with the International Monetary Fund, a cap has been placed on the over 90 days domestic arrears at the level of that at end-March 2013, according to the fiscal policy paper for 2014-15 tabled in Parliament by Finance and Planning Minister Dr Peter Phillips recently.

Commenting on the 2014-15 Budget after it was tabled in Parliament in April, Shaw said its credibility could be questioned because of what he calls the aggressive build-up of arrears in the payment of bills, noting that the Government owed billions of dollars to suppliers.

The fiscal policy paper said that for some time now the Government of Jamaica has built up payment arrears for goods and services.

It added that while it is expected that there will be some arrears from time to time, the Government acknowledged that arrears which remain outstanding for long periods will have a negative impact on the sustainability of any business and impose significant fiscal risks on the Budget.

Referring to the maintenance of the cap on arrears, the paper said that among those identified were statutory deductions for Pay-As-You-Earn (PAYE), National Insurance Scheme (NIS), National Housing Trust (NHT) and Education Tax, as well as drugs and medical supplies and other purchases of goods and services.

Ministries and departments are now required to submit monthly reports to the Ministry of Finance for monitoring to ensure the cap is not breached.

The paper said that where there is a threat to the cap, resources will be strategically allocated within the limits of the expenditure budget to make the requisite payments.

The Government said it will also seek to set off obligations it has to suppliers against amounts owed by those suppliers to the Government.

With respect to electricity payment arrears for street lighting, it said the Ministry of Finance and the Ministry of Local Government would be collaborating early in fiscal year 2014-15 "to develop a sustainable strategy for addressing the problem". The strategy, it added, will include a programme to convert the lighting by using energy-saving LED bulbs.

The Ministry of Finance has also issued instructions, effective March 1, 2014, to allow for the withholding of all statutory deductions - PAYE, Education Tax, NIS and NHT contributions - by the accountant general and for those to be transferred directly to Tax Administration Jamaica.

The revised system will also ensure that commitments to spend can only be made where a warrant exists to cover the funds required to support the issue of a purchase order.