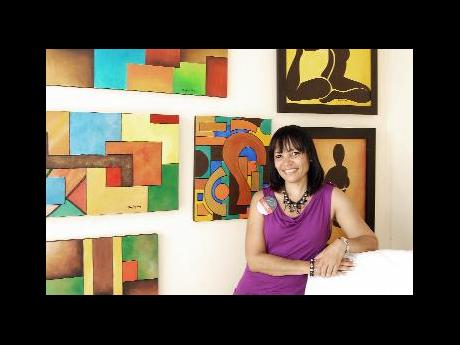 Vivienne Bayley-Hay displays her painting at the Liguanea Arts Festival at the Chinese Benevolent Association on Sunday. - Colin Hamilton/Freelance Photographer

A new date and a new venue were no deterrent to the art-loving patrons who turned out for the 11th staging of the Liguanea Art Festival on Sunday.

Two hours after the gates to the Chinese Benevolent Association (CBA) were opened, the Jamaica College car park across the road was already filling up. The occupants of those vehicles were already feasting their eyes on a wide variety of art, including jewellery, paintings, drawings, ceramics, photography, and sculptures.

Those patrons gave the 2014 edition of "Jamaica's only premier outdoor artshow" high marks.

"I think it's amazing. The quality of what is being offered is of a high standard. Mr Nicely's work is just one of the things that speak to me; the way he treats the wood and speaks to the wood is very special. Basically, it speaks to my imagination," said Saskia Vandernud.

Carlene Craig, however, had mixed feelings about the change in venue. "I like it here (CBA), but I preferred it at Liguanea plaza, but it could be I am just used to that venue. I also think I am being lazy. I could just pop into the pharmacy and pop into the supermarket while also enjoying the art fair," she said, acknowledging that despite that, the layout was fabulous.

Jamaica's culture was also manifested by the use of musical instruments by exhibitors like Richard Atkinson and Jeff Menzies.

Menzies, who lectures at the Edna Manley College of the Visual and Performing Arts in the Sculpture Department at the School of Art, showed pieces where he used the gaudy to carve out musical instruments such as the guitar and the banjo. Atkinson, using papier mache, explained that he normally incorporates a lot of musical items in his pieces.

bring back the culture

"I love music, and what is cultural in our music, I usually depict it. For instance, the drum, the abeng, sometime the banjo, sometime the violin, the saxophone and tambourine, but mostly the drums, everything instrumental. I try to bring back the culture in my work."

The day also included a number of the regular features as well as some new exhibitions.

The Kingston Industrial Garage Company was one of the intriguing exhibitors. Thomas, sales executive at the company, explained that he did not think everybody who attended the festival was looking for art.

"So we are here to display our cars, and hopefully, we will find one or two persons who might just be looking for a car and we make a sale today, so that's why we are here. There's a very good crowd here, and that is always a good look."

Entertainment is always a regular feature at the festival, but this year, the onus of the live entertainment rested on the International Youth Fellowship (IYF). Known for high-energy choreography and colourful costumes depicting different countries, the group did not disappoint.

In the traditional colours of South Korea, China and Jamaica (among others) they performed to Latin, Asian, soca and contemporary beats. The group also threw in an interactive puppet show based on the David and Goliath story.