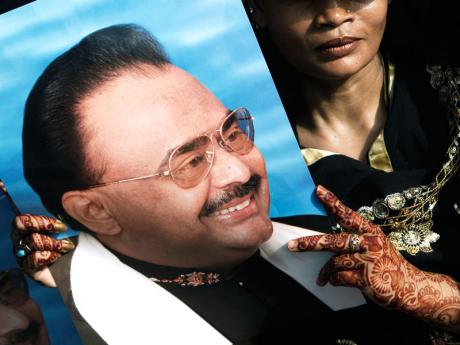 In this file photo, a supporter of Altaf Hussain, leader of the Muttahida Qaumi Movement, holds his picture during a protest rally in Karachi, Pakistan.

British police yesterday arrested leading Pakistani politician Altaf Hussain on suspicion of money-laundering, a move that sparked fears of violence in his home base of Karachi.

Police in Britain do not name suspects until they are charged. But when asked about Hussain, the Metropolitan Police said a 60-year-old had been detained at a residence in northwest London yesterday mornng.

Hussain, who is 60, heads the Muttahida Qaumi Movement, or MQM, one of Pakistan's major political parties.

He has lived in self-imposed exile in Britain since 1992 but regularly addresses large gatherings in Pakistan by telephone link, and is known for stirring speeches that can whip his followers into a frenzy.

In 2010, another MQM politician, Imran Farooq, was stabbed to death in a daylight street attack in London. The slaying triggered riots in Karachi, where the party has its biggest base of support. No one has been charged over the killing.

Hussain's arrest sent shockwaves through Karachi, Pakistan's largest city and economic hub. Immediately after news of his arrest aired on Pakistani television, residents started shuttering their businesses and going home, fearful that his arrest could spark a backlash.

The British diplomatic mission in Karachi was temporarily closed.

A senior MQM official, Nadeem Nusrat, appealed for calm. "We appeal to all the workers to control your emotions," he said.