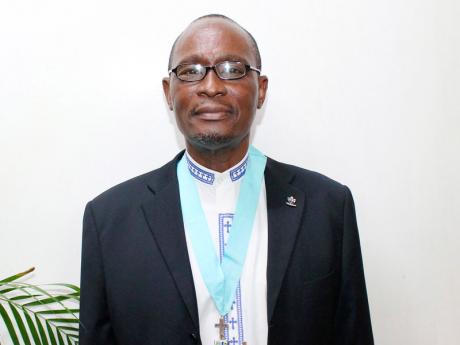 The Reverend Otto Wade, Connexional president of the Methodist Church in the Caribbean and the Americas. - Contributed

The Methodist Church in the Caribbean and the Americas will not be allowing gay marriage in its churches in the region, neither will any of its ministers be allowed to conduct same-sex weddings.

The position of this grouping of churches was stated as it ended its six-day Connexional Conference in Montego Bay, St James, on Monday.

"We have some special instructions, which will prohibit any contractual covenant or marriage between the same gender on any of our properties. We are also indicating that we are prohibiting our ministers - and all those who do marriages in our name - from performing any such ceremonies," declared the Reverend Otto Wade, Connexional president of the Methodist Church in the Caribbean and the Americas.

"We have some persons who are marriage officers, and the stance we are taking is that there will be no homosexual-type unions that will be sanctioned by our church. So we are very clear as to what we will not allow," Wade said.

It is possibly the first time that a church group in the region has publicly stated its objection to marrying gay couples. In countries such as the United States, where some churches have refused to perform these marriages, a number of homosexuals have resorted to lawsuits to force the churches to marry them.

The Methodist Church in the Caribbean and the Americas also used its conference to denounce homosexuality as ungodly; however, at the same time, it recommended tolerance towards homosexuals.

"The Methodist Church in the Caribbean and the Americas affirms that the bond in marriage - the intimacy and procreation - is a gift from God and that the act of persons from the same sex, especially engaging in a sexual relationship, cannot be approved of God from scriptures, neither can it be approved by us as a church," Wade said.

The Connexional Conference brought together ministers from the eight Caribbean districts along with ministers from Guyana, Panama, Costa Rica, Belize, and Honduras, which constitute the Americas. Their mandate is to make decisions for and on behalf of the Methodist Church in the region.

In declaring the church's objection to homosexuality, Wade affirmed the church's stance in defence of the biblical union of man and woman, while rejecting homosexuality as a sin that is disruptive to human existence and normal society. In explaining further, he said that a man and a woman in a sexual relationship look towards procreation, but the homosexual act negates that.

"So we have to ask the question: If all persons started living woman to woman and man with man, where would humanity be?" asked the churchman.

He went on to state that in a matter of days, the church would be issuing a full statement on gambling and homosexuality.

However, while noting that the church condemns the act of homosexuality as sin, Wade is calling for tolerance towards "the sinner, who can be redeemed".

"What we are saying is that we would never condone the sin, but we have to respect and appreciate the sinner," said Wade. "Therefore, the church, in its statement, will be indicating that we condemn any kind of homophobic violence or any other things that are visited on homosexuals."