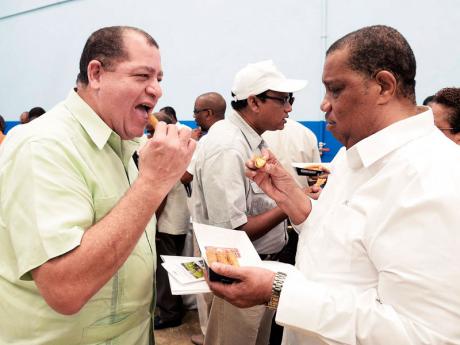 Agriculture Minister Roger Clarke (right) and Opposition Spokesman on Finance Audley Shaw enjoy potato wedges during the Canadian Hunger Foundation's launch of a CDN$20-million (J$2-billion) initiative to support buyers and producers of fresh produce across the Caribbean. The launch was held at the Christiana packaging plant in Manchester yesterday. - Ian Allen/Staff Photographer

Small farmers and processors in the Caribbean are missing out on a CDN$100- million-per-year market for fresh produce because of shifting market conditions and challenges in reliably meeting the quality, quantity, and food-safety needs of buyers year-round.

This is a situation the Canadian Hunger Foundation (CHF) is working to address through its Promotion of Regional Opportunities for Produce Through Enterprises and Linkages (PROPEL) project.

"Despite a wealth of potential in the region, some countries we will be working in currently import 90 per cent or more of their fresh produce. In Grenada, for example, only 2.5 per cent of fresh produce served in hotels is locally produced. This has troubling implications for Caribbean nations," Stewart Hardacre, president and chief executive officer of CHF, told yesterday's official launch of the local PROPEL project at Coleyville, Manchester.

The Canadian government is investing CDN$20 million (J$2 billion) over six years to link major buyers of fresh produce in their respective markets such as supermarkets and hotels in the first place to domestic, then regional, and eventually, international markets.

Yesterday's launch took place at the Christiana packing facility, which is operated by the Christiana Potato Growers' Co-operative Association, consistent with the plan to help Jamaica achieve self-sufficiency in Irish potato production by 2015. The project will also be implemented in Trinidad and Tobago, Grenada, Dominica, St Lucia, Barbados, Guyana, and St Vincent and the Grenadines.

Hardacre explained that through PROPEL, a Caribbean produce-marketing corporation would be established to serve as a broker between small to medium-sized farmers and large buyers, taking orders from buyers and issuing contracts for farmers for the supply of fresh produce at a specific quality and quantity and to be delivered at a specific time.

Describing the project objectives as ambitious, the CHF president expressed confidence and optimism that it would yield significant results.

He told the launch: "Up to 28,000 Caribbean producers will be better equipped to supply regionally grown produce to high-value market buyers. Of those, over 26,000 farmers and producers will intensify, improve, or expand their farm operations and reach the required quality and food-safety levels to supply these markets. An additional 1,500 young entrepreneurs will be supported to start farming or agro-processing businesses serving the high-value market.

"In total, we expect that over 75,000 additional people will also benefit as family members, employees, and other members of producer groups as new job opportunities are created and farming family incomes increase."