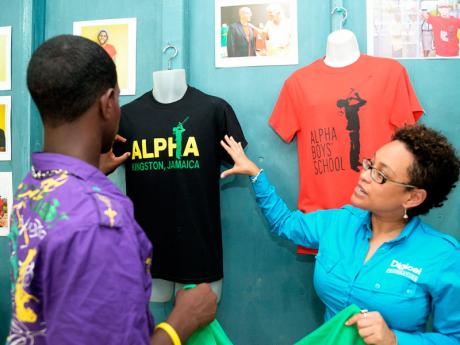 Following last year's launch of the screen-printing enterprise known as Alpha Wear, the brand is en route to becoming more than just a representation of 26 South Camp Road in Kingston. It is shaping up to be another great Jamaican product.

In August 2013, the Digicel Foundation partnered with the Alpha Boys' School to help the institution acquire its own screen-printing machine and related equipment to establish Alpha Wear. It was expected that the machine would not only allow the students to be trained in a more marketable skill, but would also generate income for the school to offset operational expenses.

Since then, Alpha Wear has been sold at stores such as Things Jamaican, locally; Miss Lily's in New York, USA; and in a few outlets in Japan.

The building housing the screen-printing enterprise was renovated by the Digicel Foundation on Labour Day to provide more adequate space for the clothing store, offices, and production space.

"This project has been a huge step forward for the institution. We see it growing, and when it grows, Alpha will become more sustainable as the business aspect adds another dimension to the project," Joshua Chamberlain, special projects manager at the Alpha Boys' Home, told The Gleaner.

"We can see the development of the boys as we are also preparing them to go out into the working world. Alpha is a centre for creativity, and this building here is a huge step forward. This new generation will grow exponentially and we expect them to really step up to the plate," he continued.

Garfield, a student at the institution, said the programme has had a very positive impact on him.

"This has been a wonderful and memorable experience. I decided that I wanted to learn how to print these shirts, and since then, I've become excellent at printing them," he said.

"Practice makes perfect, and my confidence has grown, not only with the printing of these shirts, but also with engaging other people," Garfield continued.

Given the recent transition of the school from a residential programme to an education and skills-training institution, the opportunities afforded by Alpha Wear have become even more critical.

"Alpha has always been near to us, not only because we are in same vicinity, but music means so much to the Digicel brand and culture. It was only natural for the foundation to focus on an organisation that was trying to become self-reliant," Kerry-Jo Lyn, senior programme manager at the Digicel Foundation, told The Gleaner.

"We also decided that with the transition that's going on, it's important to support the skills-training element even more," Lyn added.

She also urged the rest of corporate Jamaica to embrace the initiative.

"There is also our annual 5K. It's the Digicel Foundation's 10th anniversary year, and we are pushing for Digicel's friends and family to be out in their numbers. Whoever gets a Digicel shirt, we want it to be printed at Alpha, and so that's our way of supporting," Lyn said.

"More businesses need to be funnelled in Alpha's direction. Anyone can do it - not just Digicel. Your money will be going to the legacy of this school and I think it is a worthy cause for sure," she added.