Was Benny White's Prado driven by a ghost? 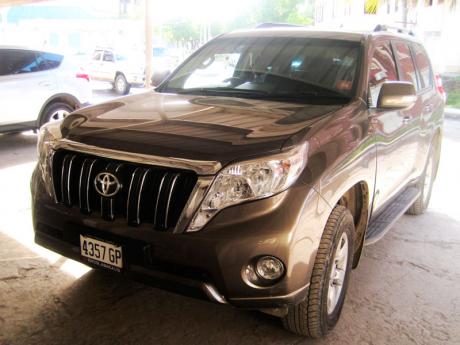 Port Antonio Mayor Benny White's Toyota Prado was the source of much discussion after it mysteriously moved from its parking spot last week. - photo by Gareth Davis

Was it a ghost and, if not, what, or who, drove a 2014 Toyota Prado belonging to mayor of Port Antonio, Benny White, from its designated parking area at the Portland Parish Council building?

The mysterious incident reportedly took place last Friday, shortly after 10 am, and was witnessed by several parish council employees, along with a security guard who was on duty at the time.

"I am still baffled as to what really happened," said the security guard who asked that his name not be used.

"The mayor arrived on Friday and the Prado was parked at the designated spot assigned to the mayor. He exited the vehicle, with keys in hand, and headed upstairs to a meeting," the security guard said. "But what took place shortly after is still a mystery, as the vehicle was seen reversing from its parked spot to the roadway. What is also strange is that the spouse of one of the administrators was also assisting in directing the vehicle to the main road."

The Gleaner was told, by at least six employees at the council, on Monday, that they too witnessed the Prado being reversed and that it was they who shouted to the security guard that someone was attempting to steal the mayor's vehicle.

But with employees at the council baffled by the incident, the security guard said he was told by the spouse of the administrator that he (the spouse) saw a shirtless man inside the vehicle, sitting in the driver's seat.

The security guard's claim was backed up by a handful of employees on location during The Gleaner's visit on Monday.

White, laughing uncontrollably, dismissed the thought that the vehicle was moved by a ghost, although he could not explained how or why the vehicle was taken from its designated parking spot, since he had the keys.

"I don't believe in ghost or duppy stories. The vehicle was parked and the engine turned off. I had the keys but, from what they are saying, it is a mystery. All who claimed to have witnessed the incident have concluded that at no time did anyone exit the vehicle," White said.

"What is even stranger is that the lever in the vehicle was still stationed in park when the security guard entered."

Since the incident, an alleged warner woman (a woman with a self-proclaimed spiritual gift) has visited the council, sprinkling oil and holy water on the mayor's vehicle, while warning about judgment.