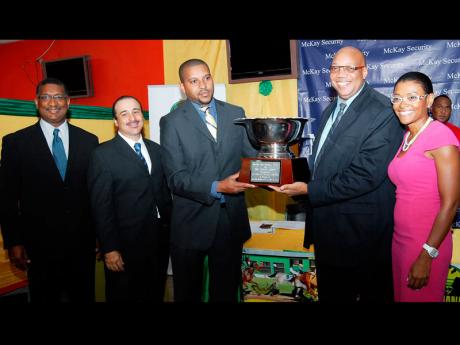 Triple Crown hopefuls TALENTED TONY K and QUEEN PAULA will come face-to-face for the first time in the 94th running of the McKay Security Jamaica Derby, to be run over 2400 metres at Caymanas Park on Saturday, June 14.

The clash between the respective Guineas' winners was highlighted by Caymanas Track Limited's (CTL) racing secretary, Denzil Miller Jr, during yesterday's launch in the Trainers' Room of Caymanas Park. It was attended by representatives of title sponsors McKay Security, associate sponsors Pepsi Jamaica, KFC, L.P. Azar, and the Herald Printers, as well as the Jamaica Racing Commission and association heads.

"All the top three-year-olds this season will be present," said Miller.

"In addition to the CD Alexander 2000 Guineas winner TALENTED TONY K from the Lorne Kirlew camp and the 1000 Guineas heroine QUEEN PAULA, who is owned, trained, and bred by Lorenzo Robinson, the field will include Bigga Oaks winner RAEVEN RENAE from the Fitzroy Glispie stables the Anthony Nunes-trained RELAMPAGO, who was runner-up to 'TONY K' in both the 2000Guineas and Lotto Classic (Governor's Cup), as well as Philip Feanny's ROCKETMAN, who was a close third in the recent Lotto Classic; stable-companion BARS OF GOLD; Gary Subratie's BOLD AVIATOR; and recent winner, THE CHOSEN ONE.

"It has the makings of an intriguing contest, especially with the two genuine speed horses TALENTED TONY K and QUEEN PAULA coming to make things pretty hot following runaway wins in the Guineas," said Miller, who was quick to add that the Derby is a true test of speed, stamina, courage, and class.

Kirlew and Robinson were both present at the launch and both were confident of rising to the occasion in this the second leg of the Triple crown series.

"For me it's a date with destiny," declared Robinson. "Right now, Queen Paula is sweet like sugar, and with the Derby distance not a problem, I have high hopes for her."

Kirlew, who named TALENTED TONY K in honour of his late brother, Tony Kirlew, who died tragically at Caymanas Park in August, 2012, said, "Tony K represents class, and after successfully giving away weight in the Governor's Cup, is the horse to beat."

Jason McKay, managing director, McKay Security, said his company would contribute $2.5 million to the purse. He recalled that this would be the second year that his company would be associated with the Derby, having joined with title sponsor Vivabarefoot (shoe company) last year.

In his address, Cedric Stewart, chief executive officer of CTL, said: "Although the purse of $7 million is one of the richest in local horse racing, the prestige of winning the derby outlasts any other consideration associated with this race."