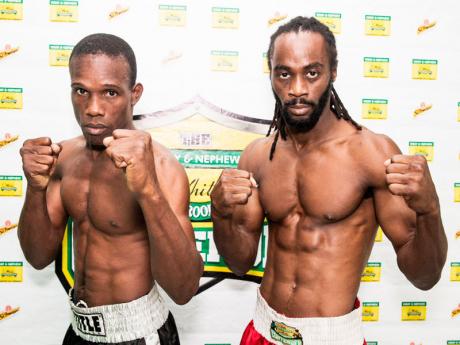 Jamaica team's Donovan 'Police' Campbell, crowned Wray and Nephew Welterweight Contender 2012, will try to move one step closer to the 2014 title tonight, when he clashes with the Caribbean team's Christopher 'Shaka' Henry in the last quarter-final bout of the series at the Chinese Benevolent Association auditorium.

Fight time is 8:30 p.m. with two amateur bouts, followed by the main event at 9:30, which will be broadcast live on TVJ.

In the preliminaries, Campbell got past Anthony Osbourne in a competitive bout, Henry, from Barbados, defeated Jamaica's Glenroy 'Bumpy' Beckford in one of the most controversial contests of the series.

Beckford was awarded the decision, but Henry's camp protested that a knockdown in the third round had not been signalled by the referee, so the automatic point deduction was not scored by the judges.

After reviewing a tape of the fight, The Jamaica Boxing Board upheld the appeal - as there was, in fact, a knockdown - and awarded the decision to Henry.

It should be an interesting contest. Campbell has a record of 12 wins, eight losses and a draw. Henry has 25 wins and 24 losses.

Both men predicted that they would be the 2014 champion at the start of the competition.

"People are saying that I cannot win the Contender belt again, and I'm going let my fists do the talking, and show everyone that I mean business," he said.

"Nuh bwoy caan stop me. Shaka (Christopher Henry) need to go back home, and I'm going to send him there."

Henry, in the meantime, was a lot more reserved.

"I've heard about Donovan and I'm really looking forward to fighting him," the Barbadian said. "He's a great competitor and may the best boxer win."

There is very little to choose between them, but the statistic that jumps out is that Campbell has only won two of his fights inside the distance, while Henry has won 18 of his 25 fights by knockout or technical knockout.

Based on what happened in the preliminaries, a decision on points seems to be the most likely outcome, but one has to assume that with such a high knockout ratio on his resume, if the opportunity presents itself, Henry will take it.

An interesting technical battle looms and, if there are any fireworks, it could come from Henry.