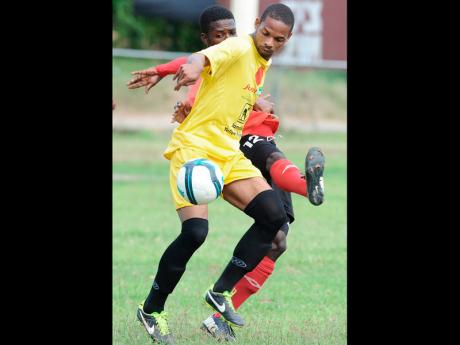 The Reno team is in pole position on six points, the same as Barbican of KSAFA. However, Barbican are in second position with an inferior goal difference. Jamalco are next on four points, followed by Axum on one point, in the race for two spots to next season's Red Stripe Premier League.

With the return games set to start today, Reno are fully aware that a win against Axum would put them firmly on course, and although playing away from home, they are highly fancied as they trounced Axum 4-0 in the first round two weeks ago.

"We will be travelling to St Mary in order to get a win away, as our two victories were at home," coach of Reno, Godfrey Drummond, told The Gleaner yesterday. "We know that no game will be easy, so we are ready for the challenges ahead."

Craig Foster has led the way for Reno with six goals in three play-off games, including a hat-trick against Axum at Frome Sports Complex.

"Foster is on a hot streak, but it's an all-round team effort. A win tomorrow (today) would put us on our way," he noted.

Axum may be down, but they are certainly not out. However, they need to start winning now.

"We are playing at home and need the three points, so the focus is on a win against Reno," Axum's manager, Marvin Bohardosingh, told The Gleaner.

In the other game, Barbican FC will host Jamalco Sports Club at Barbican Sports Complex, starting at 3:30 p.m.

Barbican will look for their third straight victory at home in their quest for a historic berth in the island's top-flight football competition next season.

The Denton Shedden-coached Barbican are on a revenge mission as they lost to Jamalco, 1-0, in the series opener last month.