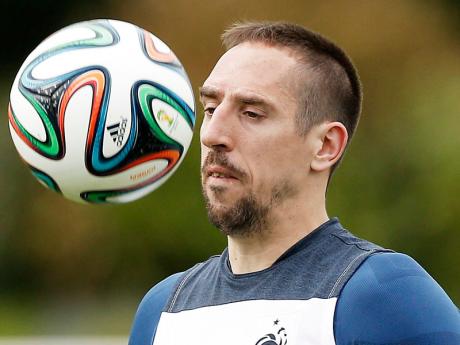 France's soccer player Franck Ribéry heads the ball during a training session at the Clairefontaine training centre outside Paris. - AP

France coach Didier Deschamps has included Franck Ribéry in his final 23-man squad for the World Cup, even though the Bayern Munich winger is still recovering from a troublesome back injury.

Deschamps named his squad last month, but officially submitted the list to FIFA late Monday, the French Football Federation said on its website.

There were reports prior to the friendly against Paraguay on Sunday that Ribéry could be doubtful for the tournament in Brazil. But Deschamps has already played down those fears, saying after the Paraguay game that he hopes the Bayern Munich winger will play some part in Sunday's final warm-up match against Jamaica in Lille.

The only change to the squad announced on May 13 sees goalkeeper Stephane Ruffier replacing Steve Mandanda, who injured his neck playing for Marseille four days later.

Ribéry, who is widely considered to be France's best player, along with Real Madrid striker Karim Benzema, did not play in France's 1-1 draw with Paraguay or in the 4-0 win against Norway last week Tuesday.

At the European Championship six years ago, then-coach Raymond Domenech gambled on including veteran midfielder Patrick Vieira in his squad, even though he had a serious thigh injury, and Vieira never recovered in time to play. France went out at the group stage.

In 2002, the same thing happened when midfield great Zinedine Zidane injured his thigh in France's final friendly match against South Korea and coach Roger Lemerre took him to the World Cup. Zidane did not play in a defeat to Senegal and a draw against Uruguay, and struggled when he returned to play against Denmark. Holders France lost 2-0 and went out at the group stage.

Ribéry's final appearance of the season for Bayern was as a substitute in the German Cup final win against Borussia Dortmund on May 17. He had been rested since the 4-0 defeat to Real Madrid in the return leg of their Champions League semifinal on April 29.