Kentucky plant emblematic of move from coal to gas 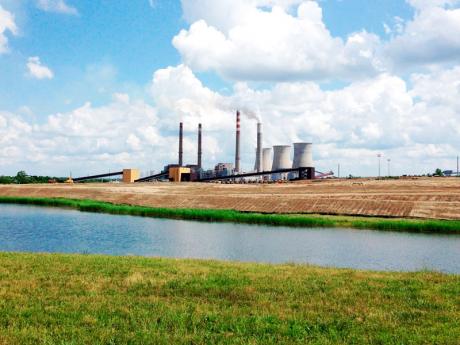 The Paradise Fossil Plant in Drakesboro, Kentucky, on Tuesday, June 3, sits in the background, while seen in proximity to the lake is the clearing for a new natural gas burning plant. The new US$1-billion facility will replace two coal-burning units at the plant beginning in 2017. - AP

In the shadow of Paradise Fossil Plant's ageing smokestacks, where white steam and carbon dioxide rises into the sky, outdated coal-fired generators are being replaced with one that runs on natural gas.

The change in Muhlenberg County, once the United States' top producer of coal, is emblematic of what's been happening across the country as natural gas becomes cheaper and electric utilities try to meet stiffer carbon emissions rules the Obama administration announced this week.

When the US$1-billion natural gas facility is finished in 2017, the Tennessee Valley Authority (TVA), the nation's largest public utility, will shut down two coal-burning units at Paradise that date to the 1960s.

The Environmental Protection Agency says natural gas generators produce about half the carbon dioxide of coal-fired units, and a fraction of other harmful pollutants.

"It's a fraction of what it is on a coal plant," said Billy Sabin, who is managing the transition to the natural gas plant at the Paradise facility.

Natural gas is "available, cheap and perceived to be secure for a long time into the future", said Charles Ebinger, director of the Energy Security Initiative at the Washington-based Brookings Institution.

Ebinger said utilities around the country anticipated that the new regulations would require huge capital spending, so many have opted to simply close their coal-fired plants and replace them with gas.

But the efficient gas technology isn't welcome by everyone in the county, where the first coal seams were dug in the 1800s and immortalised in John Prine's song Paradise: "Well, they dug for their coal till the land was forsaken, Then they wrote it all down as the progress of man".

Randall Parham, who earns about US$19 an hour working at the Paradise No. 9 mine, said new restrictions set forth by the White House on Monday could endanger the livelihood of many in Kentucky. The state is required to cut its carbon emissions by 18 per cent by 2030.

"Coal is all that's here, that's the jobs," he said. "If you're not a doctor or a lawyer, coal miner is next."

Coal mining flourished in Muhlenberg County as recently as the 1970s, but tougher air restrictions have forced layoffs and cuts in production.

There's also sure to be some lost jobs at the Paradise plant when the new facility opens, since gas-fired generators need about a third of the workforce of a coal-burning unit.

During a tour of the construction site Tuesday, Sabin said Paradise would need about 130 fewer employees when the two coal-burning units shut down, bringing the plant's total employment to about 210 workers. Sabin said the utility would work to find the displaced workers jobs at other sites.

The TVA said this week that its system-wide carbon emissions are on track to be cut by 40 per cent below 2005 levels by 2020. By that time, TVA's carbon emissions will be about half what they were at the 1995 peak.