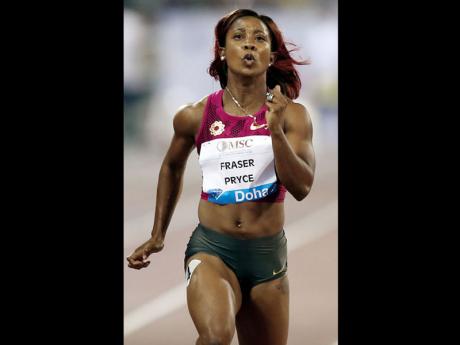 Jamaican sprinter Shelly-Ann Fraser-Pryce will return to the Diamond League stage at today's Rome Golden Gala, looking to make up for last week's disappointing last-place finish at the Prefontaine Classic in Eugene, Oregon.

Fraser-Pryce has been bothered by a leg injury for the past few weeks and looked far from her best in her last two major appearances at the IAAF World Relays (4x200m) and in Eugene (200m), despite bouncing back at a low-keyed meet in Switzerland on Tuesday, posting 11.21 in the 100m.

"In Eugene, my body did not respond. I felt a left leg problem," Fraser-Pryce said in an interview with the Associated Press.

"I have not had a perfect start to the season, but it's not a championship year. I executed the race better than in my previous 100-metre race in Doha," she added of Tuesday's victory.

Murielle Ahoure (11.06), Simone Facey (11.09) and Tori Bowie (11.10) have all gone faster than the World and Olympic champion this season over 100m, and will all be lined up alongside the Jamaican at the start, but if Fraser-Pryce (11.13) is anywhere close to proper fitness, it is difficult to look beyond her.

Kerron Stewart is also listed to compete in the event.

Justin Gatlin has been setting the pace in the men's 100m, dropping a 9.87 marker at the Beijing World Challenge meet last month before a wind-aided 9.76 in Eugene.

The American is looking to go faster today.

"My whole motto this year is 'just go'," the 2004 Olympic gold medallist was quoted by AP. "I've got Rome now and I want to go even faster."

Kemar Bailey-Cole and Nesta Carter will be looking to hand the American his first defeat of the season, but it is likely they will need to find their first legal sub-10 seconds clocking of the season if they are to do so.

Kimmari Roach and Jason Livermore are both entered in the 'B' race of the 100m.

Three Jamaicans are entered in the women's 400m hurdles, with many times Diamond race winner and current leader Kaliese Spencer looking to continue her strong start to the season.

Spencer, the fastest woman this year, after last weekend's 54.29 seconds win in Eugene at the Prefontaine Classic, will be joined by countrywomen Ristananna Tracey and Shevon Stoddart, with Americans Georganne Moline and Tiffany Williams, as well as Britain's Eilidh Child, expected to jostle for top spots.

Fresh from their IAAF World Relays experiences, upcoming sprinters Julian Forte - fit again after a problematic couple of years - and Rasheed Dwyer will compete in the 200m.

World Indoor bronze medallist Kimberly Williams will come up against World champion and 2014's best jumper so far, Caterine Ibarguen, who has gone as far as 14.87m this year, in the triple jump. Olha Salagukha and Mabel Gay should add to what should be an excitingly close contest in the sandpit.