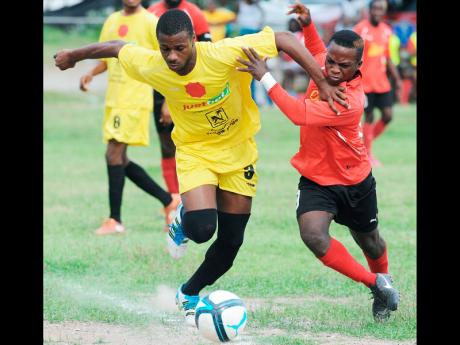 Barbican squandered a glorious opportunity to move atop the standings in the Jamaica Football Federation (JFF) Premier League all-island confederation play-offs, as they tied 0-0 with Jamalco at Barbican Complex yesterday.

In the day's other match, Reno and Axum also played to a 0-0 draw in St Mary.

Reno lead the standings with seven points, the same as Corporate Area team Barbican. However, the Westmoreland team leads by virtue of a superior goal difference.

With two rounds of matches remaining, the duo is followed by Jamalco (five points) and Axum (two).

Hosts Barbican ended the game with nine players after Akino Bailey and Andrew McLeod were both sent off, in the 86th and 90th minutes, respectively.

Barbican dominated the first half, but they were kept at bay by a very organised Jamalco defence.

Also, Shennar Parkinson and Jermaine Parris squandered a number of clear-cut chances for the hosts, who made several attacking changes in the second half. Despite these, their strikers failed to capitalise on multiple open chances in front of goal.

The clearest went to substitute Melvin Bryan, who received a through pass inside the 18-yard box from Parris. But with custodian Sheldon Mills at his mercy, he shot wide from 10 yards.

Rohan Daley, meanwhile, got Jamalco's best chance in the second half, but his overhead volley from 12 yards was well saved by the keeper.

Christoper James, manager of Barbican, was very disappointed with the result.

"It is two points lost to me because we should have gotten all three points," said James.

"We just have to wait on the last two games, but I am confident that we can progress from those matches," he said.

On the contrary Ryan Johnson, coach of Jamalco, was somewhat pleased with his team's performance.

"We came here for three points, but the Barbican team stood firm and we got a point and so we have to give thanks for the point," said Johnson.

"I think we gave a good account of ourselves and I must give credit to players because they came out and played well," he added.