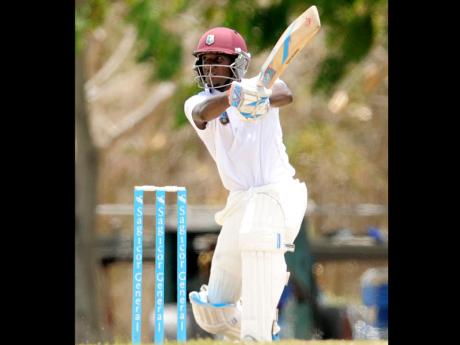 Jermaine Blackwood made a strong case for selection on the West Indies senior team with a powerful century for the West Indies High Performance Centre against Bangladesh A at Kensington Oval yesterday.

The former West Indies Under-19 star roared to 147 to help cement the HPC's advantage against Bangladesh cricketers on the third day of the second and final four-day 'Test'.

The visitors, chasing a victory target of 490 runs, were 32 for three at stumps, after the home side, on the strength of Blackwood's three-figure score - supported by an outstanding half century from Assad Fudadin - declared their second innings on 354 for five.

The HPC moved to enhance their chance of an outright victory by embarking on a run fest after resuming on their overnight total of 24 without loss.

Blackwood arrived at the crease at the fall of Chadwick Walton and was soon outscoring Fudadin in a second-wicket partnership that produced 207 runs.

The Jamaican batsman raced to his century with a boundary, even before his Guyanese teammate reached his half-century.

The partnership ended when he was stumped. Fudadin departed 11 runs shy of his century, caught at the wicket after smashing seven fours and a six.

Cottrell bagged two for 14, while Cummins picked up a wicket for the same number of runs, with Bangladesh A still requiring another 458 runs with seven second-innings wickets intact on the final day.