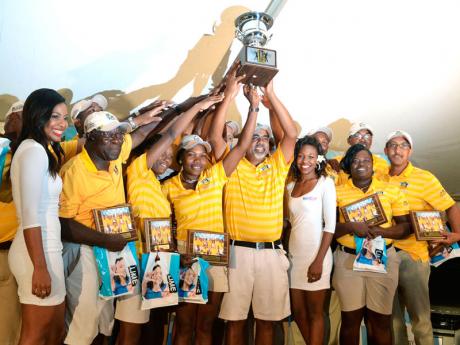 Morris accepted the LIME Cup from LIME Chairman Chris Dehring, who was, once again, pleased with the tournament.

The six-team event that was played over three days had competition on a round-robin format over five rounds.

Each team is made up of 16 male players in four handicap flights - along with four reserves - and four female players vying for top honours via a match-play format.

The event, dubbed The LIME Cup, started on May 4 at Caymanas golf course then moved to Cinnamon Hill, before concluding at Sandals on Sunday.

Sherece Walker captured the Most Valuable Player award for the women, with Don Anderson capturing the male category.

They, like several others, were given tablets by LIME, along with trophies for their effort.

The event, broadcast by organiser SportsMax, is Jamaica's most prestigious golf tournament, being sponsored to the tune of $3.5 million. LIME has invested some $20 million in the tournament since committing in 2010.

The tournament was broadcast in 25 Caribbean countries on SportsMax and on SportsMax's sister channel, CEEN, in North America.