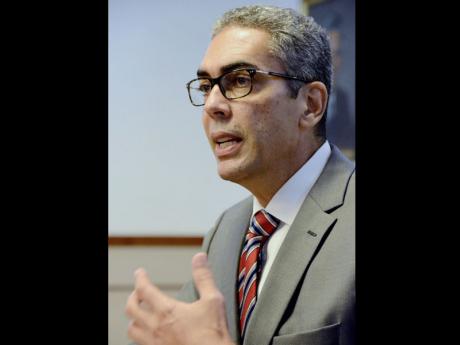 Richard Byles, president and CEO of Sagicor Group Jamaica Limited, says his company will be trekking behind its new partner Capital and Advice SA into every Central American market.

The push begins right away.

"We are giving consideration to expansion into another country," Byles said on Tuesday at the Sagicor's annual general meeting in New Kingston, the first since the insurance and financial services group was restructured.

"The people we partnered with in Costa Rica have operations in all of Central America, and the agreement we have is that we will, one by one, go to all of the Central American countries."

Sagicor has a 50-50 partnership with Capital and Advice on an insurance business in its partner's home market of Costa Rica.

The other Central American markets are Belize, El Salvador, Guatemala, Honduras, Nicaragua and Panama. Byles did not say in which of those countries Sagicor would next test its footprint.

The Costa Rican business is branded under Sagicor's name.

"We started operations in March 2013. The first 10 months have been very satisfactory, in fact, a little better than we have expected," said Byles.

"Picked up a small loss and established 'a good little foothold' in the market. This year, we are working very hard to grow the business."

Byles said the partners are initially focused not so much on profit but on building an efficient operation in a new market for the Jamaican group.

"We are every cautious about the operations there and we are doing it in such a manner that we may not make a lot of money, but we won't make any significant losses either," he told shareholders,

"We are really hedging our bets in Costa Rica in how we do business. Generally, we are very optimistic. I would say it's a good start - modest but very good."

Sagicor Costa Rica is reported to have reached "operational break-even from a cash flow perspective" in August, and ultimately reached break-even in November, according to Sagicor Group's annual report.

This year, the business will focus on selling mass insurance through financial and non financial institutions, marketing of insurance products especially designed for private education, a group niche health product that will be new to the Costa Rican market, the report said.

Ambassador Anthony Johnson commented at the AGM that Sagicor was treading in the footsteps of other Jamaican companies that had taken bananas and coffee to Costa Rica. He said that Sagicor should consider Panama next where "one-third of the population are Jamaican."

Sagicor said last year that the Costa Rican deal was negotiated through its St Lucian subsidiary, and that it represented investment of US$6 million.

Within its home market, Jamaica, Sagicor Group says its main project will be the expansion of Sagicor Bank, new inroads in the creditor life market and generally to grow top-line income.

Sagicor Group reported revenues of $42 billion in 2013, and made net profit of $6.3 billion, even after factoring a $1b loss from the national debt swap. Profits were up by more than half-billion dollars in the year.

The group is awaiting sign-off on its $9.5b acquisition of RBC Royal Bank Jamaica by the central bank. Its plan is to merge the banking assets.

Byles said he expects the buildout of the banking operation to occupy him for the next 24 months.