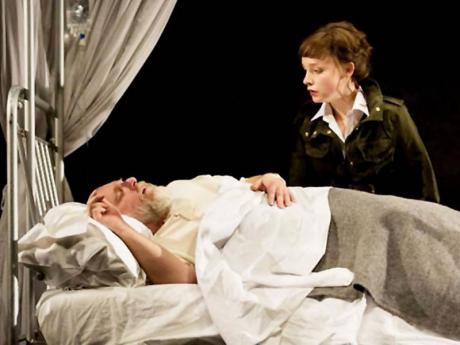 'Simon Russell Beale proves once again why he is one of our great actors.' - The Times

Simon Russell Beale and Sam Mendes have been collaborators for almost 25 years and are known to bring out the best in each other. Their synergy on King Lear was long been in the making and has been hailed as a masterpiece.

The play presents a fresh and inspiring interpretation of Shakespeare's tragedy, set in a modern-day totalitarian state. Lear, an aged tyrant, decides to divide his kingdom among his three daughters according to which of them is most eloquent in praising him. His favourite, Cordelia, says nothing. Lear's world descends into chaos.

The play features a 20-man cast, with Olivia Vinall as Cordelia, Kate Fleetwood as Goneril, Stephen Boxer as the Earl of Gloucester, and Stanley Townsend as the Earl of Kent.

Shakespeare's King Lear will be shown at the Palace Cineplex this Sunday, June 8, at 11:30 a.m.

Tickets are on sale at the box office of the Palace Cineplex and via the web at www.palaceamusement.com with a Palace Card.