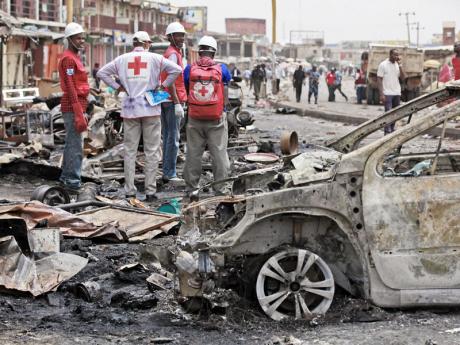 Boko Haram militants dressed as soldiers slaughtered at least 200 civilians in three villages in northeastern Nigeria and the military failed to intervene even though it was warned that an attack was imminent, witnesses said yesterday.

A community leader who witnessed the killings on Monday said residents of the Gwoza local government district in Borno state had pleaded for the military to send soldiers to protect the area after they heard that militants were about to attack, but help didn't arrive. The killings occurred in Danjara, Agapalwa, and Antagara.

"We all thought they were the soldiers that we earlier reported to that the insurgents might attack us," said a community leader who escaped the massacre and fled to Maiduguri, Borno state capital.

The militants arrived in Toyota Hilux pickup trucks, commonly used by the military, and told the civilians they were soldiers "and we are here to protect you all," the same tactic used by the group when they kidnapped more than 300 girls from a school in the town of Chibok on April 15.

After people gathered in the centre on the orders of the militants, "they begin to shout 'Allahu Akbar, Allahu Akbar' on top of their voices, then they began to fire at the people continuously for a very long time until all that gathered were all dead," said the witness who didn't want to be named for fear for his safety.