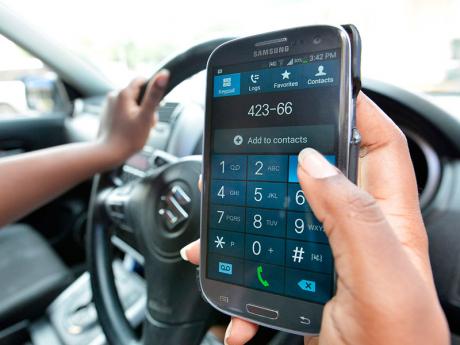 HUGE FINES are coming for motorists who commit traffic offences under the proposed new Road Traffic Act, which was tabled in the House of Representatives on Wednesday.

If lawmakers pass the proposed statute in its current form, a new offence of driving and using a hand held electronic device, such as a cell phone, will attract a fine of $10,000. On the other hand, motorists who use a car television, within the driver's line of sight while driving, will be slapped with a $13,000 fine.

Vice-chairman of the National Road Safety Council (NRSC) Dr Lucien Jones said the use of cell phones while driving is a major issue internationally. "We believe it is one of the reasons people are being distracted," Dr Jones reasoned, adding that this provision is a major step in the right direction, going forward.

Motorists who accumulate significant numbers of demerit points above the threshold for suspension and have been escaping the law, will now have to contend with the Island Traffic Authority (ITA) which has been empowered to suspend licences.

Dr Lucien Jones, told The Gleaner yesterday that his organisation has been fighting for years to have the ITA installed with the requisite power to suspend drivers' licences.

He explained that at present, there is a gap in the law and the only recourse is to go to the court. Dr Jones is of the view that this development will help to restore discipline on the nation's roads.

And, motorists may have to think twice before flooring the gas pedal, as fines for speeding would have skyrocketed, in some instances, by more than 300 per cent.

The police and road-safety authorities often cite speeding as one of the main contributing factors to accidents and road deaths.

Motorists who exceed the speed limit by 50 kilometres/hour or more will be slapped with a $45,000 fine, and in default of payment, to one month imprisonment.

Noting that speeding and careless driving were the main reasons for crashes and road deaths, Dr Jones argued that the increased fines for this offence should act as a deterrent to motorists. "If the fines for speeding are sufficiently high, we believe it will make a difference in terms of conformity with the law."