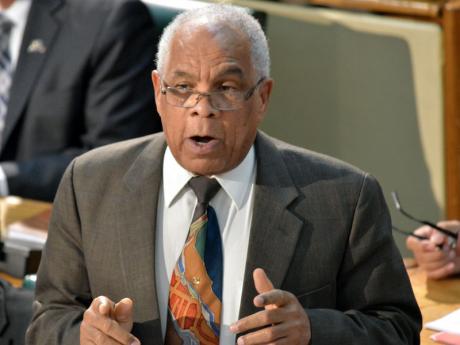 SENIOR CABINET Minister Omar Davies said the approach taken by the opposition could be detrimental to discussions on the PetroCaribe Development Fund.

"This Fund, if you did anything to undermine confidence in its management, there are strong forces internally located who may not share this Parliament's endorsement of the Fund or may not share its importance to us," Davies, who is also minister of transport and works, said on Wednesday, as he offered words of advice to the Parliament.

A sparring match had developed between Audley Shaw, the opposition spokesman on finance, and Finance Minister Dr Peter Phillips on the matter of the Fund's management. Shaw had tabled questions which Phillips answered, but not without sharp words and accusations of lack of forthrightness from Shaw when Davies intervened.

He said in the same way vital information is shared outside the public glare on matters such as defence, the opposition should consider using a confidential manner to get answers on the PetroCaribe Fund.

"This Fund is too important, not to JLP, not to PNP, but to the Government and people of Jamaica. It is too easy for what seems to be a harmless set of question to become a headline, not just in Jamaica, but elsewhere, to become detrimental to the future of the Fund."

The PetroCaribe agreement gives Jamaica and other Caribbean countries preferential payment conditions on oil purchases from Venezuela. Under the agreement, countries receive a loan to purchase oil at one and two per cent rates of interest and 25 years to pay. The agreement now also provides funds to assist developmental projects as well.

Information to Parliament, presented by Phillips, indicates that nearly US$3 billion has been collected under the Fund and that a total of US$221.9 million has been repaid to the Venezuelan Government under the agreement.

Meanwhile, the Government revealed on Wednesday that it has abandoned an independent risk assessment of the PetroCaribe Development Fund because of what Phillips said are concerns regarding the bona fides of the consultant which was commissioned to undertake a study in 2013.

Responding to questions posed by Shaw in the House, Phillips said the board, having hired the consultant, re-examined his qualifications and decided to terminate the contract.

Phillips cited possible copyright infringement that led to the termination of the consultant. He said the matter has been turned over to the Attorney General's chambers for a legal opinion. The board has also instructed that the monies paid to the consultant be recovered.

Shaw, however, suggested that the board terminated the arrangement with the consultant because it was unhappy with the results of the assessment.

Phillips said Shaw was imputing motives and that he was seeking to damage the reputation of the Fund. He said the report of the consultant is tantamount to getting advice from a medical doctor who turned out not to be one.

Shaw said it is an indictment on the board of the PetroCaribe to have appointed a quack to do the work.