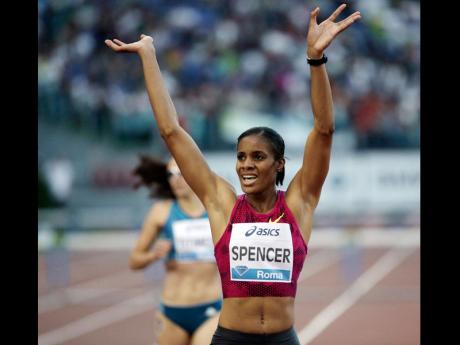 Kaliese Spencer, however, continues to shine, capturing her second 400m hurdles race this season to take the early Diamond Race lead. Her winning time was a world-leading 53.97 seconds. American Georganne Moline was second in 54.56, while Eilidh Child of Britain took third in 54.82. Jamaica's Shevon Stoddart (55.98) and Ristananna Tracey (56.91) were fifth and ninth, respectively.

Fraser-Pryce, the world and Olympic champion, stopped the clock at 11.19 seconds with seven other women crossing the line ahead of her. American Tori Bowie ran a personal best 11.05 seconds to take the event - her second Diamond League sprint win of the season after her success at last week's Prefontaine Classic.

Fraser-Pryce has been hampered by a leg injury over the past few weeks and concerns are beginning to mount after her struggles, which had her participation in the recent IAAF World Relays in doubt before her uncharacteristic eighth-place finish at the Prefontaine Classic last week.

American Justin Gatlin seems a man possessed this season, continuing his impressive early form to remain unbeaten in the 100m in 9.91, ahead of Jamaican Nesta Carter, 10.02 and Adam Gemili (Great Britain), 10.07. Kemar Bailey-Cole finished eighth in 10.26.

Julian Forte - running in only his second Diamond League meet and - Rasheed Dwyer found the going tough in the men's 200m, with Forte placing fourth in 20.49 and Dwyer a place behind in 20.51.