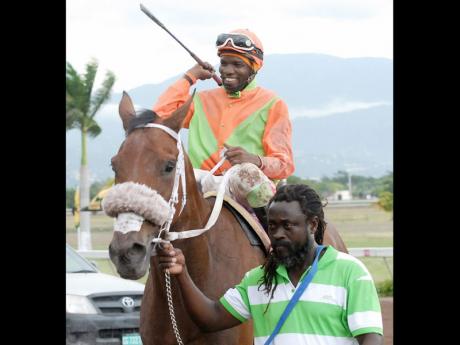 The three-year-old colt BECKHAM (Dane Nelson up) being led to the winners' enclosure by groom Wayne Malcolm after his decisive victory in last Saturday's eighth race at Caymanas Park. - Colin Hamilton/Freelance Photographer

Tomorrow's pre-derby Hall of Fame race meet at Caymanas Park offers nine races, all embracing the Pick-9 which had no takers at the June 1 Sunday meet.

One-million dollars remains in the kitty and if caught, the Pick-9 should offer a payout in the region of $1.5 million.

We look at the first Super-6 which commences with a $450,000-$400,000 claiming race over 1200 metres to be contested by seven starters including recent winner LIGHT BRIGADE, who ran on strongly over 1100 metres on April 30 to beat ROLEX and SHE'S SO SPECIAL in decisive fashion.

The five-year-old gelding from the stables of Rudolph Hardial failed in his bid for the hat-trick when finishing fifth to the classy ROCK UNION in a fast-run race over 1200 metres on May 23, but with less to do in present company, should prove too strong for the front running SHE'S SO SPECIAL and DI COBRE.

The speedy course horse - THIS IS IT - from the stables of champion trainer Wayne DaCosta, should not be caught in the second Super-6 race over the straight. Six have been declared but THIS IS IT with apprentice Romario Saunders up, has looked so sharp at exercise in preparation for the race, galloping five furlongs from the gates in 58.4, that she will not be easily denied with only 51kg DAGGA DAGGA LINKS, twice a disqualified winner this season, looks the obvious danger from the convenient mark of 48kg.

They all have the Margaret Parchment-trained SEQUOYAH to beat in the fourth race over 1600 metres to beat following his fast-finishing second to PLAY STATION over 1500 metres on May 23. The four-year-old gelding has apparently settled down and despite the claims of BARACODA and THE MARSHALL'S DIVA, will not be easily denied with only 52kg.

The fifth, for the Insurance Company of the West Indies (ICWI) Trophy over 1100 metres for three-year-old fillies (non winners of two), should come down to a straight five between BRUSSEL SPROUT (Shane Ellis up) and the very fit EXEL (Dane Nelson) who was a fast finishing second to BROWN GEORGE recently. The speed of the Anthony Nunes-trained BRUSSEL SPROUT, however, should settle all argument in a field of seven.

The last two races should be won by the recent runaway winner on debut, MARLEY'S GLORY, who has little to beat with Dick Cardenas riding for trainer Fitzroy Glispie, and stable-companion WHITE MARL (working well), who is poised to make a winning debut in the seventh for maiden three-year-olds.