Chrome odds on for Triple Crown 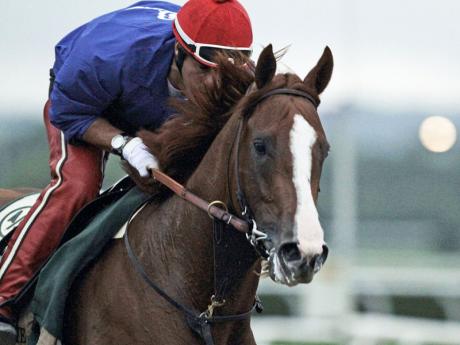 California Chrome on the exercise track at Belmont Park. - AP

The Kentucky Derby and Preakness winner will face 10 rivals old and new tomorrow at Belmont Park. Since Affirmed became the last Triple Crown winner in 1978, three Belmont fields with the same history on the line also drew 11 horses in 1981, 1988 and 2002.

California Chrome will break from the No. 2 post under Victor Espinoza, putting nine horses to his outside and giving Espinoza a good look at the early speed. Eleven Belmont winners have come out of that spot, the last being Tabasco Cat in 1994.

California Chrome went for his usual gallop earlier Wednesday, and Sherman was pleased.

"I feel better about this race than I have any other race, to be honest with you, just looking at the horse and saying, 'Wow,'" he said.

Of California Chrome's 10 rivals, four come into the Belmont off a five-week break. Commanding Curve hasn't run since finishing second in the Kentucky Derby on May 3; Wicked Strong has been off since stumbling and finishing fourth in the Derby.

Two other Derby horses, Samraat (fifth) and Medal Count (eighth), also skipped the Preakness on May 17.

Wicked Strong was a distant second choice at 6-1 and drew post No. 9. The colt is based at Belmont, and has one win in two previous races at the sprawling track.