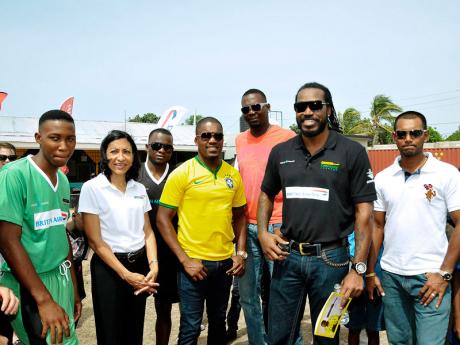 Though he tried, West Indies opener Chris Gayle could not hold back tears as he officially launched the local leg of his academy at Lucas Cricket Club yesterday.

The big left-hander, whose has become renowned for his powerful stroke play, broke down while talking about the occasion, which for him was "a dream come true".

"To be here today and witness myself setting up an academy for underprivileged youngsters to learn the game as well as life skills is indeed an honour and a privilege," said Gayle before sobbing, and taking out a handkerchief.

"Being here brings back memories of me as a youngster, who used to jump the walls of Lucas from my house across the street, and just wanting the opportunity to learn the sport of cricket and become a better person.

"To have come from that far, and being here now is quite moving, and the hope is that this academy will similarly open doors and opportunities for youngsters."

The Gayle Academy team will cater for 16 young persons between the ages of 16 and 21, on an annual basis. The players are to generally come from the inner city and should have a talent for cricket.

The hope is that the team will play matches against teams across Jamaica, as well as touring youth and international teams. The players, in order to be graduates, must spend time doing volunteer work in their communities.

The Big Six schools programme, meanwhile, will be centred on a 12-week course for education and training.

The Big Six club programme is to be delivered largely through an outreach programme, targeted at communities with low levels of school attendance, and high levels of youth-related violence, drug abuse and criminal activity.

"This is a wonderful initiative and I want to applaud Chris for making it a reality," said West Indies Cricket Board president, Dave Cameron, during the launch, which was attended by several local sports personalities and British High Commissioner to Jamaica David Fitton.

"The setting up of an academy like this speaks to the respect of human life, especially as it relates to the value of education. It also has the potential to help identify and nurture young cricketing talents," Heaven said.

Meanwhile, High Commissioner Fitton, whose office, along with the England-based Cricket for Change Foundation, has been helping Gayle to set up the academy, said they were pleased to be associated with the venture.

"We are delighted with the vision and plans of the academy, and are pleased to be associated with the venture. We wish it ever success, and promise to do whatever we can to make it a success," he said.

Also present were Diane Corrie, British Airways commercial manager for the Caribbean, whose company has so far sponsored the academy to the tune of £28,000; Wavell Hinds, president of the West Indies Players' Association; Oneil Cruickshank, president of Lucas; and Digicel sponsorship executive, Nicola Sutherland-Hawkes.