Pogba primed to shine for France 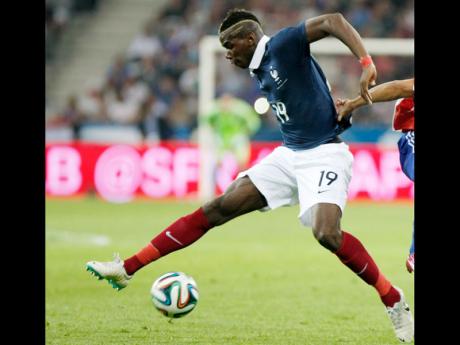 If he seizes this golden opportunity in the engine room of a France team sufficiently talented to surprise almost any opponent on a good day, this will be the World Cup that puts Paul Pogba's name up in bright lights.

That's not as big an 'if' as it sounds. The 21-year-old's potential is so eyeball-bustingly obvious, that it is only an issue of when - not whether - Pogba will take over from the likes of Xavi Hernandez, Yaya Toure or Steven Gerrard as one of contemporary football's most destructive attack-minded midfielders.

"He is the only young player about whom I'm not afraid to say that he's already a great, because I know he's not going to get a big head, and he proves it with each match," says Pogba's veteran France teammate, Patrice Evra, who has seen other next-big-things fall short of expectations in eight years at Manchester United and 57 games for Les Bleus.

He didn't make many mistakes, but one of Alex Ferguson's biggest in 26 years managing Manchester United was letting Pogba slip through his fingers.

Evra says he tried in vain to talk Pogba out of leaving United, telling him: "Here, you'll become a legend. Be patient." Pogba says the last straw was a December 31, 2011 Premier League match against Blackburn. Missing first-choice midfielders, Ferguson plugged the gap with a full-back, Brazilian Rafael da Silva, rather than call Pogba off the bench.

"I was disgusted," Pogba said in an interview for French broadcaster Canal Plus.

United lost 3-2 and Pogba said he lost "the relationship I had with the manager. I was really disappointed".

Perhaps not as disappointed as United's accountants when a football think tank in Switzerland this week estimated Pogba's market value now at northward of €60 million (US$80 million), ranking him as football's sixth most valuable player and most valuable midfielder.

Pogba is now one of the first names on the team sheet. Not once in 10 games for France has coach Didier Deschamps put Pogba on the bench. Pogba is still a work in progress; his passing can be wayward, and self-assuredness looks like overconfidence when Pogba lingers too long on the ball. In only his second game in French blue, a 1-0 loss to world champion Spain in World Cup qualifiers last year, Pogba collected two yellow cards in two minutes, ramming a knee into Xabi Alonso, and raking his studs on Xavi's right foot.

Pogba called the sending off "a very good lesson". He seems a quick study: He didn't pick up a card of any colour through the next seven games.

Asked about Pogba, midfielder Rio Mavuba could only marvel.

"He's an old youngster," Mavuba said with a chuckle. "A very relaxed player."

But one primed to go bang in Brazil.