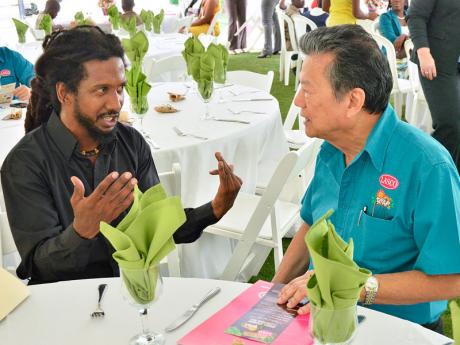 Many know him as the front man from the reggae band Rootz Underground, but Stephen Newland is much more diverse; and it may even come as a shock to some to find out that the musician is also an active environmentalist.

Newland, the programme director for the Re-leaf Environmental Awareness Program (REAP), in partnership with title sponsor LASCO, on Thursday handed out prizes to the 2013-2014 winners of the annual REAP competition.

The event provided a dose of edutainment, with the message of sustaining the environment taking centre stage.

Highgate Primary performed the cultural piece they entered in the Best Song category of the competition, which was won by Toll Gate Primary. The winners received a cash prize of $10,000, courtesy of the band Rootz Underground.

With that winner revealed, Newland made an announcement that left the audience in sheer awe.

The REAP director revealed that next year's winner of the best song prize would get the opportunity to record their winning song at the legendary Tuff Gong Studio.

The musician then went on to thank the Bob Marley Foundation for agreeing to come on board with the REAP initiative.

He also said that though last year's competition was great, this year's was excellent as the participants successfully met and surpassed all the set targets.

So good was the competition that the judges had a difficult time selecting this year's top 20 and, instead, had to agree on a top 22.

When all the scores were tallied, St Jago Cathedral Preparatory School emerged overall winners in the completion. Having already won the Adam Stewart Award for Most Plastic Bottles Collected, for which it was awarded $100,000, courtesy of the Sandals Foundation, St Jago copped the first-place prize and won 10 computers courtesy of the Lasco REAP initiative.

In his welcome remarks, Lascelles Chin lauded Newland's effort, saying the singer is "always looking for new ways to continue the programme and keep persons interested".

Newland said LASCO played a great role in helping to carry out the programme. He then applauded the students and teachers who participated, saying, "We just did the groundwork, you guys did the real work. You were the ones who spread the message in your communities, cleaned the beaches and planted the trees."

Since its inception, the LASCO REAP programme participants have planted more than 7,000 trees, grown gardens in more than 80 schools, collected more than 250,000 plastic bottles and engaged more than 100,000 students.