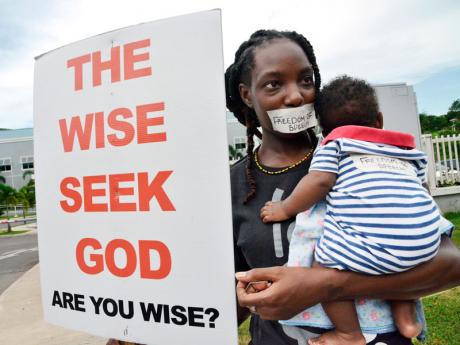 Vice-chancellor of the University of the West Indies (UWI) Nigel Harris yesterday received a DVD from a group of persistent protesters who continued their demonstration at the gate of the institution against the dismissal of Professor Brendan Bain as the director of the Caribbean HIV/AIDS Regional Training (CHART) Network.

Chairman of the Jamaica Coalition for a Healthy Society, Dr Wayne West, who led the delegation, told The Gleaner that the DVD titled: 'Sex, Lies and Rights - a Seduction of Medicine, Law and Politics,' cites implications for some fundamental rights in Jamaica, which have already hit South Africa; Canada; United States; United Kingdom and France.

As the throng stepped up their protest, word emerged during yesterday's demonstration that members from the donor agencies to CHART had expressed a desire to address the protesters, even as West bemoaned the silence of the Ministry of Health and the Pan Caribbean Partnership Against HIV/AIDS (PANCAP).

Under bleak skies, the placard-bearing protesters, clad in the customary black for the occasion and mouths taped as a symbol of the loss of free speech, continued to lash out against what they characterised as the move to silence free speech.

SUPPRESSION OF THE TRUTH

"Freedom of speech and conscience and parental rights among others things are gone, being whittled away, this agenda is being advanced through the suppression of truth," he asserted.

West charged that a culture is emerging in the form of suppression of the truth on the spread of HIV/AIDS through men who have sex with men as well as bullying in the public square. "We cannot develop good public policy if the truth is suppressed," he argued.

"We are seeing a creeping development in the US just as we are now seeing with Bain," he declared.

West said the DVD is intended to showcase the standard principle in epidemiology. "If a behaviour has a significant statistical association, that behaviour ought to be actively discouraged," he argued.

"That being the case, one would expect that the Ministry of Health and PANCAP and other groups seeking to control the spread of HIV/AIDS would actively and aggressively discourage this behaviour," said West.

Instead, he complained that PANCAP is seeking to overturn laws which prohibit this behaviour while the health ministry is mute on the subject.