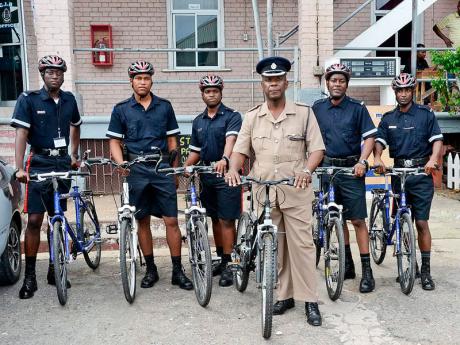 An urgent call is being made for street lights to be erected at the Ward Theatre in downtown Kingston.

Superintendent in charge of the Kingston Central Police Division, Michael Scott, who was speaking with The Gleaner following the closing ceremony of the Quick Response Bicycle Patrol Training Course, disclosed that the lack of proper lighting in the area has resulted in numerous robberies and criminal activities.

"We saw the need for more boots to be on the ground. A huge problem for us is Ward Theatre. There is no light there and that's where we have most of our robberies," he said.

"Our concentration is right there because our data show that if we have 20 robberies, at least 12 or more are done in that area (Ward Theatre) which means we need the lights. Something has to be done," he declared.

He added, "We keep emphasising road policing in a bid to enable our officers to respond quickly. We believe that with these additional officers, there will be improved efficiency in our patrol which will assist in our efforts to keep crime down."

In the meantime, assistant commissioner of police in charge of Area Four, George Quallo, charged police officers to carry out their duties in a professional manner.

"I want to make special mention of cell phones, it is very useful but it can also be a social embarrassment for us," he said.

"From time to time, your friend, family or an acquaintance wants to get in touch with you, which is important, but I beg of you that you be professional. If it means returning the call at a later date then maybe we have to do that; but our priority on the job, must be to protect the people of Jamaica," Quallo told the gathering.

He added, "We must be an example for citizens and I firmly believe that police officers must never forget to maintain their morals and integrity.