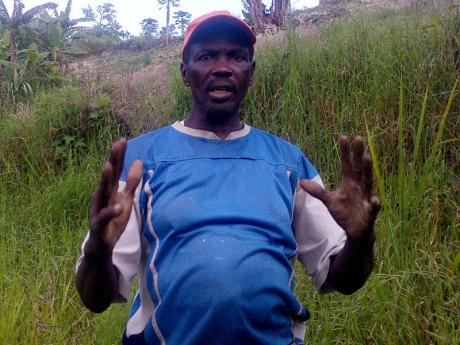 Rufus Taylor of Sligoville, St Catherine, said after enduring the pangs of kidney failure, he was healed by angels who anointed him recently.

As his wife sprayed their cabbage patch under overcast skies, Rufus Taylor of Sligoville, St Catherine, told Rural Xpress recently how earlier this year, doctors at Spanish Town Hospital had given up on him, saying he was all but dead. "Everybody say mi gone!" he exclaimed, "But see mi yah!"

Taylor's health crisis started in January after he noticed he was having frequent shortness of breath. He became ill suddenly. The self-proclaimed prophet said he even got a warning about his own illness when an angel in full white appeared at his bedside and told tell him that "yuh know say the suppen whey yuh have inna yuh side wi carry yuh home", home to his grave.

Eventually, his belly enlarged significantly. When he went to seek medical attention, he was admitted on Ward 6 in Spanish Town Hospital. It was end-stage kidney failure, according to his medics. Three weeks of excruciating pain, which he said didn't allow him to sleep, he had to bear. At first, he wasn't very perturbed, because, he said, "Mi wen affi hold on. Mi a do 27 years wid God, so mi did affi hold on".

But at one stage, he did give up. And he became fretful, despite his faith in God, and praying for other patients. People were now crowding around his bed because it seemed that he was on the brink of death. He himself believed the transition was going to take place. "A how mi see mi gone, mi nah blow, dem affi have machine on me two way, urine bag, suppen gone through mi nose, inna mi chest," he recalled.

Yet, Taylor said after a certain strange dream, he was healed. It was about 3 a.m. when the dream occurred. In it, he said, while some "pretty" angels dressed in white were anointing him, there were others going around the bed as if they were drunk. He didn't recognise them. Then they took him up honeycomb rocks, "way up high", and he wondered how he was going to go down.

From above, Taylor said he saw people lying on their sides, and he was flying over them, then they got up and started to walk. As soon as he got out of the dream, he said he called his wife to tell her to expect him back home, as he had seen his "victory". Later in the morning, he said, a porter and a nurse on duty told him they saw him flying in the air in Ward 7, off the bed, but they could not go near it, though they wanted to. "Dem say, 'brethren, yuh mek wi fraid, yuh mek wi fraid'," he recollected.

That incident, he is claiming, was the beginning of his healing, as he got better soon after, and was told to return for check-ups a year from then. This healing, which seems to border on divine intervention, was because he said he has God's work to carry on, he being a Church of God evangelist and healer himself. His evangelical work started, he said, when God told him in a vision, "Go and do mi work, else yuh going to be dumb, blind and deaf."

When Taylor returned to the hospital recently, he said the medics who knew about his 'near-death' situation were shocked to see him. He was supposed to be dead, based on their reaction. But he wasn't. So, what about those who died and didn't receive that seemingly miraculous healing that he got? He said they didn't believe in the healing power of God. "I believe in God, and I know it is God," he declared.

Yet, with nobody from the hospital around, on his farm, way in the hills of Sligoville, to corroborate his story, follow-up questions were asked to detect inconsistencies. None was found. And the evangelist, who is not attached to any one particular church, was to get some support from some of his fellow community members.

One young man, Dalton Cooper, had frequent goose pimples as Taylor talked about his experience. Cooper said yes, Taylor was indeed very ill, and he believed his story, because he, too, once had a strange dream, an incident at his home, and it was Taylor who went to intervene the very moment when 'evil' surrounded his house.

But that's another chilling story, for another time. As for Taylor, he confirmed his own story by saying, "until now, mi no tek anadda pill, brother, see mi yah, mi a drive, mi a walk."