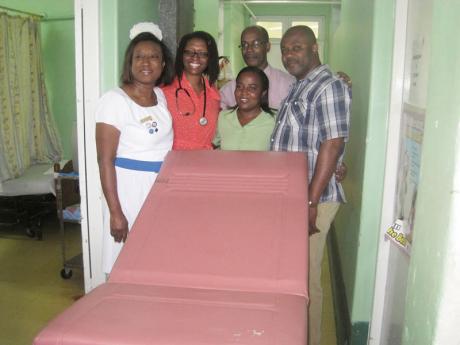 The Port Antonio hospital has acquired a much-needed delivery couch to assist mothers giving birth at its maternity ward. This was realised through the efforts of a local resident.

The delivery couch, which is the only one of its kind at the facility, was handed over to the hospital administrators last Friday by Colin 'Shaka Fame' Bell, a resident, who is better known for his expertise as a master of ceremonies at major reggae events, including Sting and Reggae Sumfest.

"It's a proud moment for me," commented Bell.

He added, "Having learned that the hospital was in need of a delivery bed, I immediately made an appeal to members of the Jamerican Air Conditioned (AC) Club, which is based in United States (US), of which I am the founder. The club was formed after making a link with listeners from the US during one of my radio programmes on Stylz FM. At first, I wanted to form a fan club, but I decided it was bigger than that, thus the AC club was formed. Members of the club were (re) enthusiastic about the idea of assisting our hospital and, as a result, the equipment was sourced by them."

According to Bell, the club was registered as a non-profit organisation. And since then, club members have committed to provide assistance whenever possible to the hospital.

He noted that club members, who are also practioners at Princeton Health Institute in New Jersey, have visited Jamaica and met with him on more than one occasion. He noted also that they (club members in the US) are on a quest to get Princeton Medical Center to adopt the Port Antonio Hospital, a process that is far advanced.

And Wendy Allen-Davis, senior medical officer at the hospital, expressed thanks for the donation, which she claimed will go a far way in assisting with the delivery process at the maternity ward.

"We are a Type C hospital, and the focus right now is on maternal and child health," she said.

Allen-Davis added, "We do have need for delivery beds, in fact, we need three delivery beds. This equipment is really an examination couch, which can be used to examine our ladies. Again, we are thankful to Mr Bell and his AC overseas members. We look forward to continued relations, and we look forward also to the adoption by Princeton."