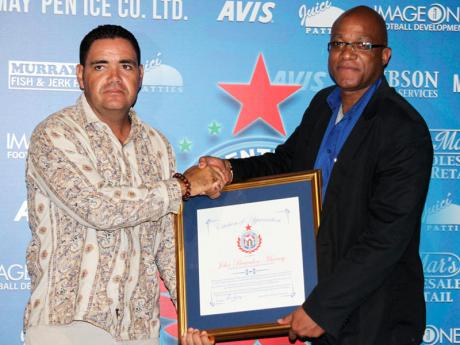 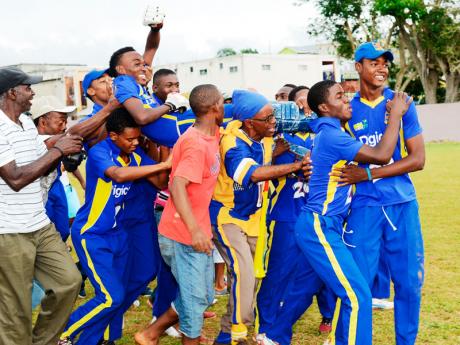 St Elizabeth Technical High School (STETHS) team members and avid supporters liftDennis McGarvey, who was mainly responsible for the team's victory over Vere Technical in theISSA/Digicel All-Island T20 cricket final at Manchester High School last Saturday. With STETHS needing 16 runs to win in the final over, McGarvey plundered three fours and a six off the penultimate ball to secure the win. Scores: Vere 115 all out off 18.2 overs; STETHS 117 for nine wickets off 19.5 overs. - Contributed
1
2

In Zone 'A' action last Sunday, Mystix from Hagley Park Road came from three games down to clip The Dip 6-5 while defending champions Eagles Strikers won 8-3 in an away match at Eltham Park.

On the previous Sunday, Eagles lost for the first time this season in a home match at Hughenden Plaza, going under to The Dip, who came from 3-5 down to win the last three games at 6-5.

Eagles and Eastern All-Stars are the leaders in Zone 'A' and 'B', respectively, ahead of Mystix and Mister C. Matches on tomorrow are Eagles vs Starliner at Hughenden Plaza, The Dip vs Mercury in Gregory Park, and Eastern vs Lords and Ladies at Bourbon House, Windward Road.

Defending champions Jamalco made a winning start in the 2014 Western Sports/Jamaica Broilers Business House Reggae Jammin' 50-over cricket league, thanks to a 75-run victory over National Water Commission (NWC) at Jamalco in Clarendon last Sunday.

Batting first, Jamalco raced to 220 for nine off their allotted 50 overs. Veteran player Winston 'Sala' Osbourne led the way with 49 while his son, Tino Osbourne, chipped in with 37. Domain Wilson took two for 30, Fabian Forbes two for 33 and Christopher Senior two for 37. NWC replied with 105 in 28 overs, with openers Omar Allison and Wilson getting 43 and 25, respectively, against former Jamaica Under-19 player, Pete Salmon, four for 24, and Errol Thomas, three for 16.

The other opening-round match between Jamaica National and Sagicor had to be postponed as the Up Park Camp venue was not available in time for the match.

The competition takes a break tomorrow for the playing of the first Test between the West Indies and New Zealand at Sabina Park.

Former champions The Gleaner notched their first win from three matches in the KSAFA/Western Sports Business House football competition (Division One) on Monday at the Red Stripe Oval, blanking Jamaica Customs 2-0, courtesy of a double strike from Fabian Nethersole in the second half.

The Gleaner had lost their two previous matches to NWC and Wisynco 2-0 and 2-1, respectively.

In other recent matches, Scotiabank and Norman Manley International Airport drew 2-2 at Harbour View Mini Stadium, Grace Kennedy and Carib Cement played to a 1-1 draw at the Edward Seaga Sports Complex in Tivoli last Sunday, while defending champions Petrojam made it two from two with a 3-1 win over NCB at Tinson Pen, thanks to goals from Fabian Reid, Jotham Watson, and Jarron Richards.

On Monday, Carib Cement drew their consecutive match, having played to a goalless draw with Metrodade Security.

The competition continues today with Norman Manley International Airport vs Petrojam at Harbour View Stadium in Division One, University of the West Indies (UWI) vs Xerox at UWI in Division Two, Jamaica Urban Transit Company vs Sutherland Global Services at Tinson Pen, and Continental Baking Company vs NHT at Boys' Town, all starting at 4 p.m. Tomorrow's big double-header at the NWC playing field in Mona will see NCB taking on GraceKennedy at 2 p.m and NWC vs Scotiabank at 4 p.m.

JMMB won the dress parade at the Jamaica Public Service Sports Club on Thursday to signal the start of the 2014 Business House Netball Association Open League. JMMB won ahead of Sagicor and Scotiabank, who are favourites to lift the league title, with defending champions General Accident not playing this year.

The league starts today at the Queen's High School with a number of matches starting at 4 p.m. Matches are usually played at the Leila Robinson Courts at the National Stadium, but it has been closed for a month because of refurbishing.

South Central Confederation representative, Jamalco FC, have excellent opportunities to earn a place in next season's National Premier League, starting tomorrow with a home game against Axum at Wembley Sports and Excellence Centre.

They are on five points, and although third in the standings behind Reno and Barbican, they are blessed with having to play their two final games at home. Axum, on two points, are yet to win and merely have a mathematical chance. Jamalco will also host Reno on Wednesday in the final game of the round-robin series.

Both Reno and Barbican are on seven points, but could hurt each other depending on the result between the two tomorrow at Frome. So far, Jamalco have won and drawn against Barbican, drawn with Axum, but lost to Reno. Consecutive wins for Jamalco will seal them a spot, regardless of results elsewhere.

The Manchester Football Association's Under-15 tournament, sponsored by Can Care Pharmacy, will have its final today at Kirkvine Sports Club. The final will be contested by the preliminary round winners and unbeaten teams so far, 360 degrees and Manchester Academy.

The quarter-finals were held last weekend, with Manchester Academy turning back Comfort 2-1 and 360 Degrees blanking Hillstars 2-0. In the semi-finals, held midweek at the same venue, Nicholai Gayle's goal for 360 degrees ended Mile Gullys' run 1-0, while Manchester Academy completed a 3-0 rout of Downs.

Portsmouth Primary hammered Port Henderson 5-0 and stormed into the final of the Institute of Sports (INSPORTS) Portmore Under-15 football league last Wednesday. Dwayne Atkinson, Miguel Robinson, Jabari Duffus, Marcel White and a girl footballer, Cristal Coffie, were on the scoresheet. Meanwhile, Bridgeport booked their spot after a 1-0 win over Waterford. The final is scheduled for June 27 at Ferdie Neita Park in Braeton.


Right Stuff sent shock waves through the local domino world after they floored heavyweights Fort International 300-247 in the quarter-finals of the Jamaica Domino Council Association/Wray & Nephew White Overproof Rum Portmore Domino League last Sunday. Fort came into the round as the top-ranked team. In another surprise result, Spring Village beat Eradication 300-275. While the carnage was happening around them, Caribbean Classic got by Eagle View 300-277 and Cookies International avoided the upset bug when they beat Exceptional International 300-274.

Aintree Basic School took the lead in Zone Two over Holy Spirit with a 1-0 win in their INSPORTS Little League football competition at Ferdie Neita Park in Braeton recently. They also won again on Wednesday, with a 2-0 triumph over Child Plus. With the win, Aintree jumped to 13 points while Holy Spirit remained on 12.

Portsmouth are Zone Two leaders with 13 points. In their last match, they edged Elim 2-1. Silverstone (12 points) are also in the running for zone honours. The competition continues on Wednesday.

Early leaders Portmore United and Edgewater (six points) hunt their third successive win in the Colin Fagan-sponsored Portmore Under-15 football league at Passage Fort playing field tomorrow. At 3:20 p.m., Edgewater take on Rodwood in the third of four matches at the venue while Portmore close the show with a 5 p.m. clash against Watson Grove