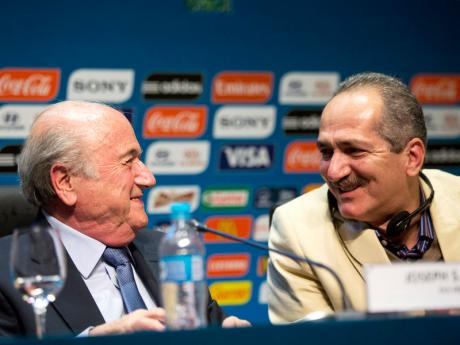 FIFA President Sepp Blatter (left) talks with Brazil's Sports Minister Aldo Rebelo during a press conference where they talked about the organisation and infrastructure of the upcoming World Cup, in Sao Paulo, Brazil. The World Cup tournament starts on June 12. - AP

Under time pressure to fly doping samples from World Cup players back to Switzerland, FIFA says they are arriving at the laboratory within 33 hours.

FIFA and the World Anti-Doping Agency (WADA)-accredited lab in Lausanne are aiming to get test results before a player's next match in Brazil several days later and provide valid data for each player's biological passport.

WADA guidelines state that "blood samples shall be analysed within 36 hours of sample collection."

Testing for the World Cup is being done in Lausanne because WADA stripped the Rio de Janeiro lab's status for repeated errors.

All 736 players at the World Cup will provide pre-tournament blood and urine samples.

"All samples arrived in satisfactory conditions, thanks to the use of special automatic cooling boxes that record the temperature during the whole transportation," Dvorak said in a FIFA statement.

Two players from each team are randomly chosen to give samples after each match.

Scientists in Lausanne are preparing to test samples around the clock to make sure any positive tests are acted on before a player's next match.

"We will make every effort to provide FIFA with the results prior to the next game," lab director Martial Saugy said.

Argentina great Diego Maradona was the last player caught doping at the World Cup - at the 1994 tournament in the United States.

Maradona tested positive for five types of the stimulant ephedrine after playing in Argentina's second group match. He was withdrawn from the tournament before being suspended.

At the Confederations Cup in Brazil last year, a player from Tahiti tested positive for a decongestant and was banned by FIFA for six months.

FIFA suspended three players from Peru, Jamaica and Zimbabwe for positive doping tests during qualifying for this year's World Cup. In a fourth case, a Moroccan player was suspended after a positive test for cannabis.