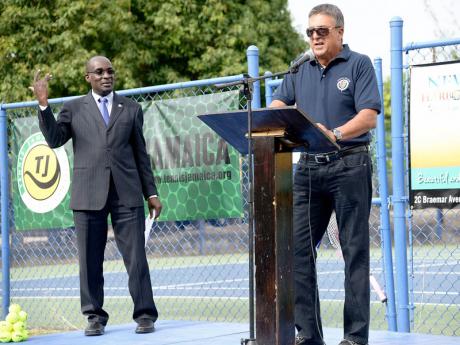 Phillip Gore, chairman of Gore Development and a past student of Jamaica College (JC), speaking at Thursday's ceremony for the rededication of the Carlton Alexander Tennis Courts. Looking on at left is principal of JC, Ruel Reid. - Gladstone Taylor/Photographer

The courts, which were in a deplorable condition, will provide the school's young tennis enthusiasts with an opportunity to develop their skills on a daily basis. In addition to the resurfacing of the courts, a perimeter fence was also installed.

"I am elated and just excited that the Jamaica College Old Boys, the parents teachers association and all the other stakeholders, they just love to invest in JC because we give good value and good return on investment," said Ruel Reid, principal of JC during Thursday's brief ceremony for the rededication of the Carlton Alexander Tennis Courts.

"One of the things people need to appreciate is that JC has always had a tremendous history in sports and we like to win and it is really part of our holistic development of our youngsters," he said.

"The youngsters need opportunities to develop their skills to learn discipline and to be able to multi-task. You have to learn to do a number of things in life and we say play hard, but study hard," Reid said. In thanking Gore, principal Reid revealed that they had already invested $25 million to refurbish a whole classroom block and have invested heavily in the JC Old Boys Foundation.

Phillip Gore, chairman of Gore Development and a past student of JC, said they committed to development of the sport as the newly refurbished facility will further help to develop the school's tennis players.

"The tennis courts were in need of repairs and my wife Christine and I felt refurbishing the courts would be a great way to support and encourage interest in the game of tennis," said Gore.

"Jamaica College provided the foundation of my success and I have not forgotten. My wife and I and the Gore Development Limited are committed to nation-building by providing opportunities for Jamaica's youth through sports and education," Gore stated.

Evans Williams, coach of the JC tennis team, believes the newly resurfaced courts will help the school to turn out a lot more junior players for Jamaica.

"Before the courts were refurbished nobody wanted to play because it was very unsafe to play on it, but now they are excited because people want to come out and play," said Williams.

Williams added: "We have one kid, Joshua Aiken, that is on the national talent squad and we are actually rebuilding right now because most of our better players have already left the school.