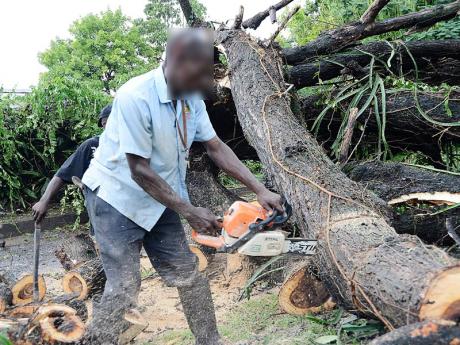 President of the Mount Peace/Clifton Farmers' Association, Collin Johnson, has expressed what he says is grave concern about the indiscriminate felling of trees, within sections of the hills overlooking the community of Kew in Lucea, Hanover.

In an interview with Western Focus earlier this week, Johnson said trees on his property have also been cut down by the wayward lumberjacks. He said fruit trees or juvenile trees are not spared by the loggers, who on a continuous basis leave a trail of devastation in their wake.

"They (loggers) are selling coal to hotels for their barbecues, for burgers or whatever. They are cutting down all kinds of hardwood trees, so what is left there is just grass. They cut down my trees long time. I run them away and they move further. There are virtually no trees left. People used to come from all over Hanover to look mangoes at Kew top during mango time, and you would see mangoes all over - mangoes on the ground and sour flies - (but) there is nothing there now,' he added.

Johnson predicted that if the trend continues, the area, which is already prone to soil erosion, will experience severe landslides. Geological studies of the area have shown that the bedrock within a large portion of Hanover's hilly interiors, including the hills above Kew, is composed mainly of shale, a soft rock that easily erodes in wet conditions.

"It (landslides) is not yet pronounced in some areas. You have mini-landslides coming down now, but if we should continue getting the kind of rain we have been getting over the last couple of months, consistently, I bet you before the end of the rainy season, we are going to get major landslides," he said.

Johnson also called for the deployment of environmental wardens, which, he said, could curb deforestation within vulnerable areas in the parish. He also suggested that the responsibilities of the Municipal Police at the Hanover Parish Council be extended to include environmental protection.

"I remember, years ago, they had environmental wardens. Where the Municipal Police are concerned, they could widen their scope to include environmental matters. And I think they should have the Forestry Department monitor that. I don't know if I would want parish council monitoring that, because politics could get into the way," he said.

"People who are short-sighted don't remember what happened to Haiti, and how Haiti came to be having all these massive landslides, mudslides or whatever it is. It is because of the same thing (deforestation)," he said.

Johnson said the unregulated access to chainsaws was also a grave part of the problem, as it has made it very easy for persons to engage in the almost-effortless felling of trees.

"Chainsaw is another culprit. Chainsaw is too free around now," he said, "it used to be a lot harder for a man to use an axe to cut down a tree, but now, the chainsaw man just cut the small ones before they get to the mature ones. And the amount of damage that can be done in a day or a week, before anybody notices it, can be irreparable. Some people hungry and some people want food; but it (indiscriminate felling) cannot be the answer. You want food now, and then tomorrow you going to be hungry? Or other people hungry tomorrow? It can't be like that.'

According to a document on landslides posted on the website of the Office of Disaster Preparedness and Emergency Management (ODPEM) landslides are the most common natural hazard in Jamaica, and an area is at risk "if the land is soft and steep, if vegetation has been removed", if water collects near a slope, if the slope has been cut into", among other things.