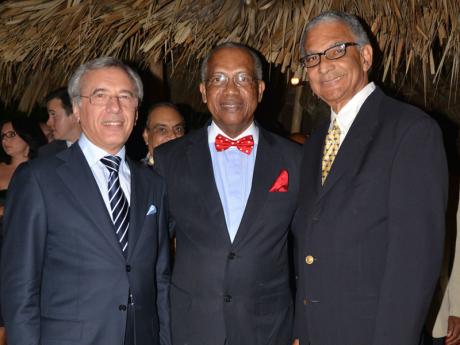 From left: Vladimir Polenov, Russian Federation Ambassador; Professor Winston Davidson; and Francis Tolluch are all smiles at the Round Hill Hotel.

Former tourism Minister Francis Tulloch was officially appointed as the first Honorary Consul of the Russian Federation in Montego Bay at a ceremony at the Round Hill Hotel in Hanover recently.

His engagement will encompass a consul district, which includes the parishes of Trelawny, St James, Hanover, and Westmoreland.

In his acceptance speech, the former parliamentarian expressed appreciation to the Russian Honorary Consul, and promised to work to promote mutual benefits for both Russia and Jamaica.

"It is indeed a great honour for me to have been appointed the Honorary Consul for Russia for the (western) region and, Your Excellency, I accept it with the greatest of humility. I am hoping that we will be able to really improve the cultural relationships between both countries," said Tulloch.

"I really look forward to working very hard with your embassy and with all the players to ensure that this friendship continues and grows not only culturally, but economically, trade wise and every wise," Tulloch added.

In congratulating Tulloch on his historic appointment, Ambassador of the Russian Federation, Vladimir Polenov, who was also in attendance, expressed a sincere desire to see expanded bilateral ties between Jamaica and Russia.

"I kindly ask you to consider the appointment of Mr Francis Tulloch as the Honorary Consul of the Russian Federation in Montego Bay as a tangible and significant sign of the willingness and readiness of our country to develop bilateral ties with Jamaica in the fields of tourism, economics and culture," the Ambassador said.

"I am sure Francis Tulloch of the Honorary Consul of Russia will actively contribute to this from his side, which is the mutual interest of our two countries and people," Polenov added.

Jamaica first established ties with the Union of Soviet Socialist Republic (USSR) in March 1975, during the regime of the late former Prime Minister Michael Manley. In January 1992, Jamaica recognised the Russian Federation as the successor state of the Soviet Union.