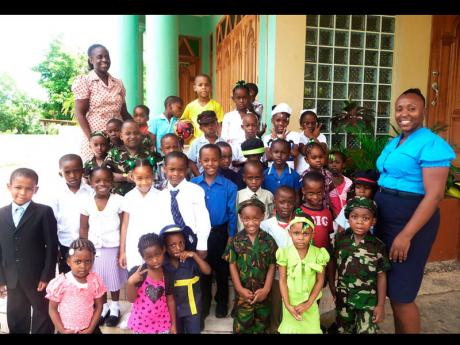 Tiny tots from the Glendevon Seventh-day Adventist Preschool and Kindergarten had a fun-filled time learning about different occupations during a career-day exercise held at the school last Thursday.

The youngsters wore uniforms depicting a range of professions, including police officers, soldiers, nurses, doctors, ministers of religion, and even building contractors.

Some came attired in police uniforms, complete with handcuffs, hats, and the appropriate boots. 'Doctors' had their stethoscopes strung neatly around their necks, and 'nurses' were fitted with cute white hats and nurse watches. 'Firefighters', who were in the majority of professions represented, wore helmets and hard boots.

Whereas all her fellow colleagues wore trousers, three-year-old, 'policewoman' D'Andra Bowes choose to wear a skirt with her pair of handcuffs hanging off her side. Smiling brightly, she told Western Focus that she wanted to become a police officer when she grows up because: "I love the pretty uniforms that the police wear, and they protect me and my mother and my father and my friends and my teacher, too."

Principal of the school, Desrine Smith, said she was pleased with the level of support from parents. She told Western Focus that it is never too early for young children to start thinking about higher education and what career options they wanted to pursue in life.

"We believe that it is good for our kindergarten students to be exposed to career guidance from early," Smith said. "This gives them a headstart to understanding what career choices they will make as they grow older, and it makes it much easier for them to choose just one."

A major highlight of the day's activities was a series of presentations conducted by several professionals, including members of the nursing fraternity, the Jamaica Constabulary Force and the Jamaica Defence Force. Due to firefighters accounting for the most professions represented, Acting Sergeant of the St James Fire Department Syrekie Scott was greeted with a lot of excitement from the little ones, who interacted with him throughout his presentation.

As is the nature of kindergarten students, everyone wanted to give their input at the same time, but Scott, who seemed to have a knack for dealing with this age group, expertly guided them through his presentation without much interruption. He followed up with a question-and-answer session at the end, and as a parting treat, allowed the excited budding professionals to briefly try on his helmet.

Scott explained his passion for firefighting and why he found it necessary to participate in career day at the school.

"In years gone by, firefighters have been stigmatised by sayings that we are very lackadaisical and lazy. We intend to create an awareness to let everyone know that this stereotype is wrong. We want to show the public that we are very professional, and we are very dynamic. We are not just out there to extinguish fires, but we also do a lot more," he told Western Focus.

"If you notice, everyone wants to become a police, lawyer, doctor, etc, but what we are doing is broadening the scope to let the children understand that a career choice to become a firefighter is a very exciting one, and it's also a very profitable and fun field," he said.